These Wetlands Feed the Largest Aquifer in the U.S. What Happens If We Lose Them?

The Ogallala Aquifer supports one fifth of America's agriculture. But its existence relies on a vital source: playas, a type of wetland that remains threatened. 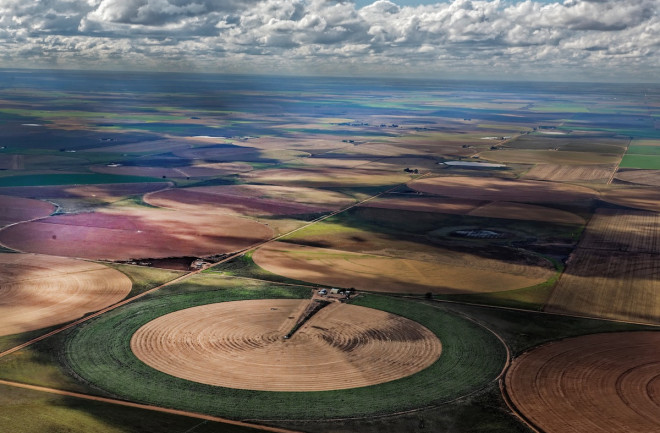 An aerial view shows the vast landscape of the Texas Panhandle. Like other areas in the Great Plains, its agriculture relies on water from the Ogallala Aquifer, which is sustained by playas. (Credit: : National Geographic Image Collection/Alamy)

Place yourself in the heart of the Great Plains, say, somewhere in the Texas Panhandle. A long, lonely stretch of interstate extends before you. Prairie grass and planted wheat cover the landscape out to the horizon, flat as a table in all directions.

But it’s not truly flat. Even on these plains there are low spots, the ground sloping almost imperceptibly toward slight, bowl-shaped depressions where the infrequent rains of this semi-arid environment collect. These are playas: wetlands that come and go, providing an oasis for life in an otherwise desiccated place.

When wet, playas harbor a plethora of amphibians, waterfowl, dragonflies and other species. But playas don’t just support the lives of birds and toads; they also support humans. Playas replenish the Ogallala Aquifer, a 948-trillion-gallon underground body of water that underpins agriculture in an eight-state region. Though these little wetlands comprise only 2 percent of the land area in the southern plains, they are the primary source of recharge for the Ogallala, which in turn sustains irrigation of the High Plains, thereby providing one-fifth of the food and fiber consumed in the U.S.

But this aquifer is being depleted. Research published in 2020 suggests that in many areas, without irrigation, these dry lands will not continue to sustain agriculture. In some places, the dry-up has already happened. “There are ghost towns in the southern High Plains right now — today,” says Bill Mullican, a former executive at the Texas Water Development Board. Playas and the recharge they provide are one of the few things safeguarding $20 billion in crop value and the future of High Plains agriculture.

The Ogallala is massive. The largest source of groundwater in the U.S., it spans over 175,000 square miles beneath parts of Colo­rado, Kansas, Nebraska, New Mexico, Oklahoma, South Dakota, Texas and Wyoming. Before the growth of irrigation on the plains, the aquifer contained approximately a quadrillion gallons of water, a volume that could fill Lake Erie more than eight times.

New pumping methods and the dawn of center-pivot irrigation systems enabled removal of significant quantities of Ogallala water in the 1950s. Since then, farmers have managed to suck up over half a Lake Erie’s worth — some estimates are closer to a whole Lake Erie’s worth — of water from the aquifer. The explosive growth in irrigated acres transformed the High Plains from a vast expanse of semiarid prairie into the so-called “breadbasket of the world,” birthing the enormous green-circle mosaic that blankets this land today.

When wet, playas are home to a variety of waterfowl, amphibians, insects and plants. (Credit: Brian O’Neill)

Though the Ogallala is far from dry, the decline in water levels presents a significant threat. In many places, the aquifer has already dropped to a level where irrigation is no longer feasible, and in most parts of the Ogallala, the water removed far exceeds that which is returned. Without some kind of change, the ability of farmers to use Ogallala water will cease, putting 10 percent of all U.S. crop value at risk.

Sustaining an aquifer requires recharge from the land above. But over most of the Ogallala, particularly its southern part, a cementlike substance called caliche hinders rainwater from getting through. For many years, researchers thought playas, which have clay soils, were practically impermeable too — just low spots where water collected and subsequently evaporated. Recent research has revealed the exact opposite.

Not only do playas contribute to recharge, they dominate recharge. During the early minutes of a rain inundation, water flows through cracks in the clay soil and into the zone just beneath the playa floor. These cracks, which form when the playa runs dry, can slice as deep as 3 feet. They facilitate water flow into the clay subsurface at rates up to 116 inches per hour. But this flow can quickly slow: Just as the clay shrinks and cracks when dry, it swells when wet. Within minutes, the cracks close up enough to severely limit any water passage through the playa.

But at the playa edge, called the annulus, water continues to flow into the aquifer even after the cracks at the bottom seal up. Scientists think that this periphery allows the most recharge, though the reason isn’t entirely clear. It may be that, being higher up, these regions receive less of the silty, fine-grained sediments which can restrict infiltration through playa floors. Whatever the reason, some studies suggest as much as 80 percent of playa recharge occurs from annuluses.

Return to the Big Dry

Though agriculture depends on playa recharge, many agricultural practices degrade playa performance. Playas suffer when crops are planted in them roads are built through them, for example. In the past, farmers often dug pits in the center of playas. These small, deep holes reduced the surface area of the water, thereby reducing evaporation and keeping the water around for irrigation and other agricultural needs. While this helped farming in the moment, it reduced recharge.

Perhaps the most common — and most insidious — way that playas have been degraded is through sedimentation. Also called siltation, this process happens when sediments run off the land, typically from tilled agricultural areas, and settle in the cracks of the playa.

Since 99 percent of playas exist on privately owned land, the protection of existing playas, and any restoration of damaged ones, falls into the hands of farmers and other agricultural producers. Several federal and state programs pay farmers to let the playas on their land lay fallow. These programs also provide technical support and funds for remediation. Non-governmental agencies help educate farmers on the utility of playas and encourage participation in playa restoration, which involves activities such as removing sediment, eliminating invasive species and planting a vegetation buffer around the playa to filter silt.

Motivated in part to provide habitat for birds, Playa Lakes Joint Venture (PLJV) has been working to protect and restore playas in five of the eight Ogallala states since 1989; a sixth was added in 2003. The organization estimates that of the nearly 72,000 playas in their region, less than 22,000 are healthy. But more than 32,000 healthy playas are needed to provide wetland habitat for migratory birds and other wildlife. Moreover, playa restoration takes time — in 2017, only 150 playas were improved.

Though the speed of remediation may be slow, the work is important, especially since there is the potential to develop a sustainable aquifer that can support irrigation for the long haul. According to Mike Carter, Joint Venture Coordinator of PLJV, many irrigators would only need to cut back by 30 or 40 percent in order to become sustainable, at least in western Kansas.

Farmers rely on water from the Ogallala Aquifer to sustain their land. When playas — like this one in Colorado — dry up, the aquifer cannot be replenished. (Credit: Charlie Riedel/AP)

Thirty percent may sound like a big ask for farmers, but in some cases, such cutbacks in irrigation are possible. For instance, on a family farm, irrigation methods are often simply handed down from one generation to the next; they’re not necessarily best practices. “If Dad turned on the pumps in May, and Dad turned off the pumps in October, then, you know, that’s [just] what we’re going to do,” Carter says. Opportunities may exist to reduce water consumption and maintain crop yields.

In any event, some kind of change is needed. Researchers at Texas Tech University predict that for a 13-county area between Lubbock and Amarillo, the reduction in the aquifer level and other factors will reduce the amount of land that can be irrigated by 60 percent between 2010 and 2059, from just over 2.3 million acres to around 925,000. Similarly, a study by Erin Haacker, now at the University of Nebraska-Lincoln, and her then-coworkers at Michigan State University indicates that in the High Plains, the reduced aquifer level will render 40 percent of the entire region unsuitable for irrigation by 2100.

When the Land Comes to Life

To survive the dry times, the spadefoot toad will spend years of its life burrowed down in the mud beneath the playa floor. There, it waits for rain.

Once a playa fills with water, these temporary wetlands enable amphibians to survive where they would otherwise perish. But in dry times, the toads take a more subterranean approach to survival. Once the rain comes, these long-dormant animals come forth in great abundance and with great vigor. They respond almost instantly, sometimes beginning to wriggle up through the mud as soon as they hear thunder. Once wet, life boils forth from the playa.

“These things can lay four or five thousand eggs,” Loren Smith, a biologist at Oklahoma State University, says of the toads. Tiger salamanders, too, can lay more than 5,000 eggs. The Great Plains toad can lay an incredible 40,000 eggs in one clutch. Once the eggs hatch and the tadpoles become toadlets, these creatures will carpet the shores of the playa from which they were born. Scientists have observed more than 10,000 toadlets emerging on a single night. “It looks like the land is moving out on that playa,” Smith says.

And playas sustain far more than just amphibians. The playas of the Central Flyway, the great migratory path taken from Canada to the Gulf of Mexico by millions of birds, provide a stopping point for these birds, a pit stop for them to rest and feed.

Though vast, harsh and arid, because of playas, the southern High Plains teems with life.

Hope in a Changing Climate?

One possibility of a brighter future for the Ogallala comes from an unlikely source: climate change. Models of future changes in the planet’s climate typically provide bad news — and many climate change models do predict average rainfall will decrease over the southern High Plains where threats to the Ogallala are most significant.

Water is pulled from the Ogallala Aquifer to irrigate cotton fields in Texas. (Credit: Bob Daemmrich/Alamy)

However, the most recent National Climate Assessment also suggests that future rainfall will occur in briefer, more intense bursts, rather than over relatively longer periods of time. This new weather pattern would cause rapid runoff toward playas, increasing the recharge over that which would occur if the same amount of water had fallen during longer, less intense storms, when more of the water would be lost to evaporation.

But, as with climate change models in general, significant uncertainty exists. Variation in the predictions of these regional models of precipitation is so great that it’s not clear if aquifer recharge will increase or decrease in the future.

Given the decline in the Ogallala Aquifer that is and has been occurring beneath the High Plains, perhaps the future will include a new focus on playa remediation. The lives of countless toads and dragonflies depend on it — as well as those of humans.