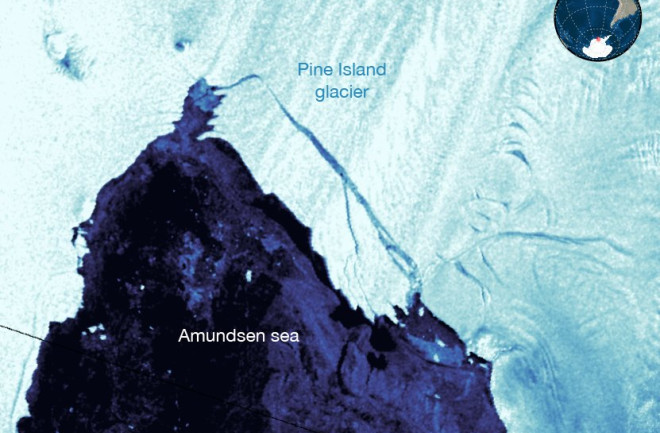 The Sentinel-1 satellite captured this image of a 100-square-mile chunk of ice calving from West Antarctica's Pine Island Glacier on September 23, 2017. (Source: Stef Lhermitte) We've now got yet another worrying sign that human-caused warming is causing the behemoth West Antarctic Ice Sheet to come unglued, threatening to raise sea level by 10 feet over time. You can see that sign in the image above from the Sentinel-1 satellite. The image shows a 103-square-mile tabular iceberg — equal in size to four and a half Manhattan islands — breaking off from the floating edge of the Pine Island Glacier in West Antarctica on September 23rd. It was posted to Twitter by Stef Lhermitte, a remote sensing expert at Delft University of Technology in the Netherlands. The glacier is like a cork in a bottle, helping to restrain nearly 10 percent of the West Antarctic Ice Sheet from pouring out into the sea. As the September 23rd calving event shows, the cork is eroding. That was not the first time a chunk of the cork broke loose. In a very similar event in 2015, an iceberg twice as large calved from the glacial front. You can see that event in this time-lapse of Sentinel-1 images, as well as growth of the rift that led to the Sept 23rd calving: https://twitter.com/StefLhermitte/status/826364887106457600 A study published last year provides insight into what's going on. Essentially, the floating ice shelf portion of the glacier appears to be breaking up from the inside out. The study showed that the 2015 calving event had its origins when a rift formed at the base of the ice shelf — and in the center, not at its edges as is typically seen. Over two years it grew upward, broke through the surface, and propagated outward toward the margins of the shelf, eventually setting the iceberg loose in late July and early August of 2015. The same things seems to have happened with this latest event. "Rifts usually form at the margins of an ice shelf, where the ice is thin and subject to shearing that rips it apart," explained Ian Howat, a glaciologist at Ohio State and lead author of the study, quoted in a release from the American Geophysical Union. So why is the Pine Island Glacier behaving differently? Something must have weakened the center of the ice shelf, "with the most likely explanation being a crevasse melted out at the bedrock level by a warming ocean," according to Howat. In 2014, research showed that the Amundsen Sea Embayment in West Antarctica, into which the Pine Island Glacier flows, is hemorrhaging ice faster than any other part of the continent. The study found that the melt rate of glaciers in this fastest-melting part of Antarctica tripled in just a decade. And in spring of 2014, two separate studies suggested that a large portion of the West Antarctic Ice Sheet, or WAIS, had passed the point of no return. Thanks to warm water intrusion beneath them, the research showed that the WAIS had begun an irreversible retreat. If that's true, over the course of a 100 years or so, the ice draining from the WAIS would raise sea level 10 feet, eventually swamping entire cities. Here's how I described it in a story for Discover magazine's Year-in-Science issue:

Imagine you’re canoeing the Niagara River when you notice mist ahead. You’re still quite a distance from Niagara Falls, but the river’s swift: There’s no turning back. Two separate studies published last spring suggest that climate change has carried the West Antarctic Ice Sheet, or WAIS, across a similar threshold. The glaciers that flow off WAIS and dump ice into the sea already have contributed nearly 10 percent to the recent increase in global sea levels. The research suggests that for a large portion of WAIS, this process “has passed the point of no return,” says Eric Rignot of the University of California, Irvine, the lead author of one of the studies. That means the ice sheet is now in irreversible retreat, and steps to slow global warming won’t stop the ice sheet from raising the sea level 10 feet, swamping cities. But there is a silver lining: Full collapse may take centuries, perhaps providing time to move populations at risk out of the way.

The most recent calving event from the Pine Island Glacier is actually the sixth major one since the year 2000, according to Stef Lhermitte. But 2015 and 2017 "are different from previous events as the calving results from internal rifts with calving fronts further inland," he wrote in a Tweet on September 23rd.