The Water That The Coast Guard Won’t Save You From 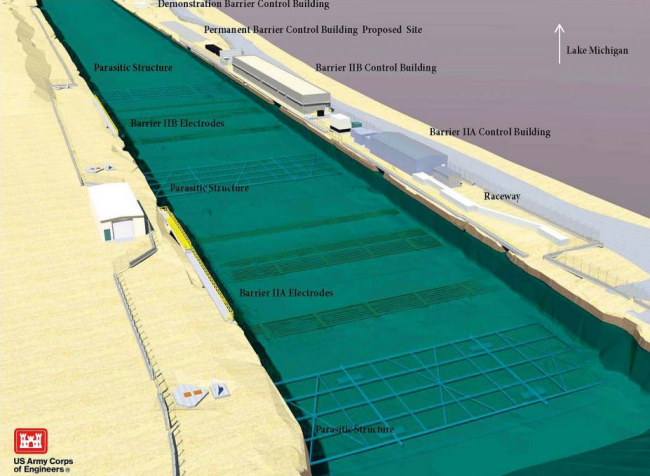 About 25 miles south of Chicago lies a stretch of water that nothing lives in. It’s not pollution or over-fishing that has wiped out nearly everything save for insects and bacteria here, it’s electricity. At the river bottom there are multiple 160-foot wide grids of electrodes issuing 2.3 volts per inch every 2.5 milliseconds. The Chicago Electric Dispersal Barrier was implemented to repel fish traveling up the shipping and sanitary canals to the Great Lakes. Specifically, the barrier’s voltage was meant to turn away Asian Carp—a voracious invasive species that most worry would destroy Great Lakes fisheries. And the electricity does its job. It turns away larger fish, and so far the Great Lakes haven’t been overrun. There is much more to this story: more about the effectiveness of the barrier and the all-out campaign of carnage (think poisoning whole river systems) undertaken to combat the Asian carp (read here and here). Recently, the practice has been questioned, as researchers found Asian carp DNA floating upwards of the barriers. But the fish barrier itself interests me. When I was an undergrad studying environmental engineering, we spoke at length about the ends we sought and the means we took to destroy the threatening Asian carp. During a lecture, my professor quipped that because of the electrified water, the fish barrier was “the only stretch of water that the Coast Guard won’t save you from.” It sounded like one of those nuggets of wisdom professors like to drop to keep drooping students awake, but he was right. If you go in the water you’re on your own. Man Down River Only a fence separates you from electrified water. And it’s only there because the canal could be considered what contractors and lawyers call an “attractive nuisance.” If the canal (or any other construction project) might be attractive to kids (or foolish adults), the state could be held liable for any injuries that occur in or around it. Hence the fence. According to safety reports, if you swim at almost any point within the range of the electric barriers that span the channel, you risk either involuntary muscles contractions or ventricular fibrillation. Once you are in range, the barrier’s electric pulses hijack your own nervous system. Your muscles respond to the outside shock the same way they respond to the electrical architecture your body is made up of, only much more violently. Needless to say, if you had to swim and breathe to stay alive, not being able to control your muscles, breathe, or maintain a steady heartbeat would be problematic. As such, the entire area is a no-go zone not just for civilians, but for the Coast Guard as well. A pamphlet issued by the US Coast Guard lays out this stark warning:

“There is no identified safe method to recover a victim from the water while in the electrified zone. If a person or object falls out of your vessel, the U.S. Coast Guard will not [emphasis mine] attempt a rescue until the person is 450ft down river, due to electric hazard for the rescuers.”

It’s a tough call to make. It seemingly goes against all a rescuer’s training: don’t save them, you can’t save them. And right now the coast guard is focusing on public awareness to make sure that they don’t have to make that call. All personal watercraft are prohibited from ever coming near the electric barrier and the warnings are bulked up with heavy fines and jail time. Thankfully, there hasn’t been a test of this protocol. A shipping and sanitary canal isn’t exactly a prime swimming spot and no workers have fallen in or overboard. But we know one thing for sure. Until we find a way to safely extract some poor soul from the canal without risking more lives we will have to let the barrier do its job: turning life away. --