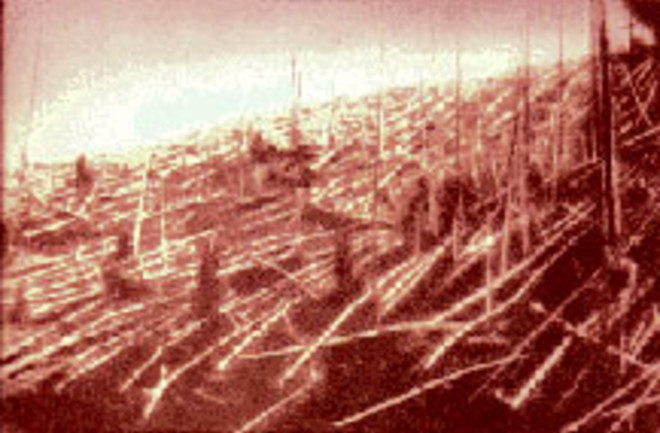 One hundred years ago today, a fireball streaked across the morning sky over Siberia and exploded, flattening the forest across an area of 830 square miles. The cause of the Tunguska Event, named for the nearby Tunguska River, has been a source of speculation ever since, with theories ranging from the absurd (space aliens!) to the most plausible: a disintegrating meteor exploding in the atmosphere. But a century after the event scientists still don't have enough evidence to conclusively say what happened.

Scientists arrived at the most likely scenario, the meteor explosion, by studying the pattern of blasted trees; they concluded that an explosion hadn't occurred at ground level, but rather four to six miles above the Earth's surface. [T]he fragment, which is believed to have measured perhaps 100 feet across (although new research suggests it may have been even smaller), was probably traveling at around 21,000 miles per hour when it exploded.... Based on later assessments of the damage, the force of the blast was estimated to be between 10 and 15 megatons of TNT, roughly a thousand times more powerful than the atomic bomb that destroyed Hiroshima [Wired News].

According to contemporary reports, the explosion was shockingly violent. Eyewitnesses reported intense heat and columns of fire shooting through the sky. Many Evenki, a tent-dwelling nomadic people indigenous to the area, told of animals, their homes and even fellow tribespeople being hurled into the air by a shock wave. An unfortunate few were incinerated. Light from the blast was visible as far west as England and, according to a contemporary report in Nature (vol 78, p 228), Londoners could still read their newspapers by the mysterious light in the night sky a day or so later [New Scientist, subscription required]. But despite the attention-grabbing nature of the Tunguska Event, the turmoil of the Russian Revolution prevented a serious scientific inquiry, and researchers didn't thoroughly survey the area until 1927.

While most scientists give credence to the meteor theory, some point out that no chunks of extraterrestrial material have ever been discovered at the site, and argue instead that the explosion was caused by an enormous upwelling of methane gas from beneath the Earth's crust. At a conference last week in Moscow researchers went over the evidence (or lack thereof) and the competing theories once again. But true believers in the meteor theory say that humanity was just lucky that the 1908 space rock exploded over the deserted Siberian forest

instead of a city, and say that the Tunguska Event should serve as a warning. Another massive meteor impact is inevitable, according to groups like the B612 Foundation.

[W]hile the odds are that the next Tunguska-size object will arrive over the ocean or Earth’s still-vast stretches of empty land, there’s no reason why it couldn’t explode over Chicago or Taipei. The big near-Earth objects, or NEO’s, are being tracked fairly well, but quite a few experts on space, risk, and resilience say we’d better start sifting for the small ones, too [Dot Earth blog, The New York Times]. Keeping track of meteors that could pose a threat is only the first step; if we spot one that looks dangerous, we'll still have to figure out how to adjust its course.