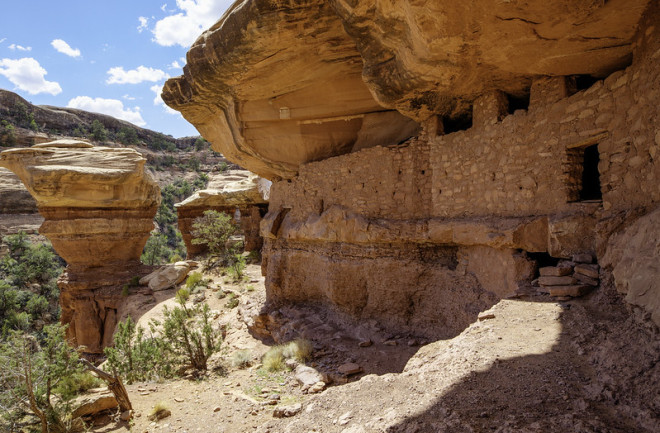 Moon House, a multi-room cliff dwelling, is an exceptional archaeological site in Bears Ears National Monument. It dates to the A.D. 1200s. Unfortunately, "looters have vacuumed the site of artifacts, and irresponsible visitors have threatened the site," according to the Grand Canyon Trust. (Credit: Bob Wick, Bureau of Land Management)

Mere hours afer being sworn in on January 20th, President Biden signed a sweeping executive order dealing with a host of public health and environmental issues. You may have heard about one of them: revocation of the permit for construction of the Keystone XL Pipeline, designed to bring heavy crude oil from Canada to the United States.

But tucked within his executive order was another significant directive that has received less attention: The president took the first steps toward restoring national monuments that had been drastically reduced in size by the Trump administration.

Among them are two previously very large national monuments in Utah that Trump cut by 2 million acres: Grant Staircase-Escalante, created by President Bill Clinton in 1996, and Bears Ears, designated by President Barack Obama in 2016.

Bears Ears is unique in that five tribes produced the proposal for the monument that Obama created under authority of the Antiquities Act. Tribes had never before been given a role like that in the creation of a national monument, and they were also supposed to play a major role in managing it.

"Nobody knows those acres better than these tribes," says Charles Wilkinson, a colleague of mine at the University of Colorado, and one of the nation's foremost experts on Indian law and natural resources law. "They have experience there for hundreds of generations."

In his own executive order in 2017, "Trump took away 83 percent of it — he blew Bears Ears apart," Wilkinson says. (The former president also reduced Grand Staircase-Escalante to about half its original size.) "What Trump did was so painful."

This map, from the Grand Canyon Trust, vividly portrays how significant the cuts were:

The original boundaries of Bears Ears National Monument are compared here to what was left after President Trump cut nearly percent of its acreage by executive order. (Credit: Stephanie Smith, Grand Canyon Trust)

Now, Biden is making restoration of the monument one of his priorities. "What a gift 2021 gave us," Wilkinson says.

The emeritus law professor played an important role in the creation of the original monument, working closely with the five tribes of the Bears Ears Inter-Tribal Coalition to produce the proposal Obama adopted to create the monument.

Comb Ridge — Tséyíkáán in Navajo — in southeastern Utah, as photographed by an astronaut aboard the International Space Station on August 20, 2019. Most of the ridge — an 80-mile-long, north-to- south-trending monocline — is still protected within Bears Ears National Monument. (Credit: NASA Earth Observatory)

You can get a sense of the geological splendor of the lands protected by the original monument designation from the image above. For a full-size version that you can click on to explore in detail, please go here.

The photo was taken by an astronaut circling high above Earth in the International Space Station. It shows a closeup of a feature known to the Navajo as Tséyíkáán. To non-native peoples it is known as Comb Ridge. (The tiny town of Bluff, Utah, is located in the upper right corner.)

This spectacular fold in Earth’s crust, called a "monocline," consists of sandstone rock layers that were tilted skyward during the Laramide mountain-building event between 40 million and 70 million years ago.

The image above provides a much broader perspective. I processed Landsat-8 satellite data (acquired on June 14, 2020) to produce the simulated 3-D view, which shows most of the Bears Ears region. For a full-sized version that provides much greater detail, please click here.

At the bottom of the image, the San Juan River snakes across southern Utah, headed for Lake Powell, the giant reservoir visible on the left side of the image. Comb Ridge is the whitish feature arrowing north toward higher terrain, which is darker because of vegetation.

The Bears Ears region contains many such wonders. The land includes deeply incised red-rock canyons, and higher, forested terrain that provides a beautiful contrast to the arresting red, orange and beige sedimentary rocks.

One of the Most Significant Cultural Landscapes

But sheer geologic spectacle is not the only reason why the region is noteworthy. There's another, particularly special one, highlighted by President Obama in his proclamation establishing the Bears Ears National Monument:

"For hundreds of generations, native peoples lived in the surrounding deep sandstone canyons, desert mesas, and meadow mountaintops, which constitute one of the densest and most significant cultural landscapes in the United States. Abundant rock art, ancient cliff dwellings, ceremonial sites, and countless other artifacts provide an extraordinary archaeological and cultural record that is important to us all, but most notably the land is profoundly sacred to many Native American tribes, including the Ute Mountain Ute Tribe, Navajo Nation, Ute Indian Tribe of the Uintah Ouray, Hopi Nation, and Zuni Tribe."

At the heart of this sacred land are twin buttes so distinctive in appearance "that in each of the native languages of the region their name is the same: Hoon'Naqvut, Shash Jáa, Kwiyagatu Nukavachi, Ansh An Lashokdiwe, or 'Bears Ears,'" Obama wrote in his proclamation.

The Bears Ears buttes, heart of the Bears Ears National Monument created by President Obama in 2016. People from more than 20 tribes in the southwestern United States journeyed to this sacred ground in traditional times. (Credit: Bruce Rinehart via Wikimedia Commons.)

"No president had ever had this idea," says Wilkison. "Obama felt that we ought to have national monuments that are important to black and brown people, and other social movements. He was a great Indian president."

Trump eviscerated the monument with the support of many state politicians, who argued that the federal government was usurping local control and acting against the wishes of Utahans. Now that Biden has taken the first steps to restore the monument, Utah’s new governor, Spencer Cox, is pushing for "local management" and is opposing any expansion of Bears Ears, as well as Grand Staircase-Escalante.

But local governments in the Bears Ears area have voiced support for Biden's moves to restore the monument to its original boundaries. "San Juan and Grand counties as well as the towns of Bluff and Moab passed resolutions requesting Bident take 'immediate action' on the issue," the Salt Lake City Tribune reports. Two towns near the monument, Blanding and Monticello, oppose it.

The Governor Should Listen to the Tribes

If "local management" is really what the Utah governor wants, then he should be listening to the tribes. No people living in the region have a closer connectinon to the land than the native peoples.

They could not have spoken more clearly when they proposed the original monument in the first place — and they asked for, and received, a key role in managing it. Since then, they have joined lawsuits seeking to overturn Trump's reduction of the monument's boundaries, on the grounds that while the Antiquities Act clearly gives the President of the United States broad authority to create national monuments, it does not allow the president to eviscerate any that already exist.

Whether Trump had the authority in the first place to go further than making minor adjustments to the monument's boundaries is now under review in a federal court. While that case could set an important precedent for the future, with Biden's executive order, it doesn't seem crucial now to restoring Bear's Ears.

Wilkinson believes Biden has the authority under the act to restore the monument. But the president is first making sure that legal due diligence is done in a circumstance that hasn't been seen before: one president trying to undo what another did by restoring acreage.

"Just as a legal matter, he needs to make sure it is given careful attention," Wilkinson says.

Under Biden's order, the Interior Department has been tasked with conducting a thorough review and to report back to the president within 60 days. That effort would be overseen by Biden's nominee for Secretary of the Interior — if she can be confirmed soon by the Senate. Biden's nominee is Rep. Deb Haaland, D-NM, who identifies as a 35th generation New Mexican. She would be the first Native American ever to serve in a cabinet post.

But perhaps predictably, Senate Republicans are fiercely opposing her nomination.

Regardless, the utlimate outcome for Bears Ears seems assured. "I'm confident that all of the Obama acres will come back," Wilkinson says.

And even more territory could be added. Patrick Gonzales-Rogers, executive director of the Bears Ears Inter-Tribal Coalition, is pushing for Biden not only to restore the monument to the 1.3 million acres declared by Obama, but to expand it to the 1.9 million acres that the tribes had originally proposed.