The Snows of Kilimanjaro Could Be Gone by 2022 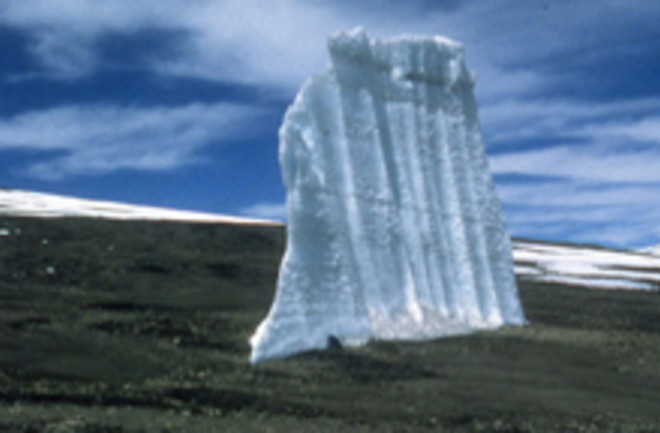 The glaciers that shine at the top of Mount Kilimanjaro, the highest peak in Africa, could vanish entirely within 15 years, according to a somber new report. Says glaciologist Lonnie Thompson:

. The mountaintop glaciers are both shrinking around the edges and growing thinner, Thompson's team found. If the current rate of ice loss continues, the mountain could be ice free as early as 2022. Thompson says his team has fresh evidence that global warming is to blame. As similar changes are occurring on other mountains in Africa, South America, and in the Himalayas, Thompson says that global climate change, not local weather effects, must be responsible for the receding ice.

"The fact that so many glaciers throughout the tropics and subtropics are showing similar responses suggests an underlying common cause," Thompson said [AP].

For the study, published in the Proceedings of the National Academy of Sciences, the researchers used maps, aerial photographs, and satellite images to track the ice's retreat over the last century, and also looked at data from instruments implanted in the glaciers in 2000. Some previous researchers have argued that Kilimanjaro's glaciers are disappearing because of what they viewed as local factors, namely less snowfall and more sublimation, which turns ice directly into water vapor. But Thompson found that higher temperatures are melting the ice, and he also argues that

the drier and less cloudy conditions leading to sublimation on Tanzania's Kilimanjaro are part of a suite of changes driven by global warming. "You change the temperature profile of this planet, you are going to change precipitation and cloudiness and humidity and temperature," he said. "Those are all part of climate change. And so to say that that Kilimanjaro is not responding to global climate change is untrue" [National Geographic News].

If the glaciers disappear entirely, it will make an anachronism of a great piece of literature.

The "snows of Kilimanjaro" were made famous in the Ernest Hemingway short story of that name in 1938, in which the main character notices "as wide as all the world, great, high and unbelievably white in the sun, was the square top of Kilimanjaro" [USA Today].