The Shifting Polar Paradox: As the Arctic Meltdown Continues, Will the Arctic Oil Rush Go On? 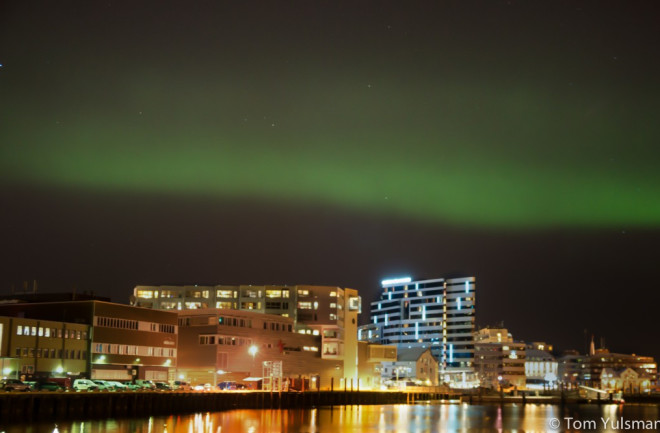 The aurora borealis over the city of Tromsø in the Norwegian Arctic on Jan. 18, 2014. Tromsø, site the of Arctic Frontiers conference, is a thriving, prosperous city that has positioned itself as the self-described gateway to the Arctic — and its suspected vast resources of oil, natural gas, and other resources. (Photo: © Tom Yulsman) If I had to come up with one word to describe the gestalt of my first winter visit to Tromsø, Norway, it would be “paradox.” I’m now here for my third winter trip, to attend the Arctic Frontiers conference, where the theme is “climate and energy.” I suspect the same word will apply — but this time for a different reason. Many things have changed since my first visit in 2013, including the price of oil, the recognition of how difficult it is to develop resources in the Arctic, and, possibly, public attitudes. “Paradox” fit very well back then. When I left my home near Boulder, Colorado that year, winter had brought cold and snow. I was anticipating even colder conditions in Tromsø. But when my flight touched down I was surprised to find that it was warmer above the Arctic Circle than at home — and that I needed an umbrella.

Source: NASA I should have remembered the Gulf Stream’s influence. (Click the thumbnail at right for a visualization of the Gulf Stream streaming toward Northern Europe.) Even so, the warmth did symbolize for me a real paradox — the “polar paradox.” Here is what I wrote about this issue after my first Arctic Frontiers conference: Global warming may well lead to new Dust Bowls, and sea level rise may eventually swamp entire countries. But for some northern nations such as Norway, the opening of the Arctic frontier due to global warming means that there is a lot of money to be made. And those economic activities, based in large measure on the burning of fossil fuels, will only make global warming worse. And therein lies the paradox. The U.S. Geological Survey estimates that 90 billion barrels of oil await discovery in the area north of the Arctic Circle. Add to that tally an estimated 1,669 trillion cubic feet of natural gas, and 44 billion barrels of natural gas liquids. This means an area comprising just 6 percent of Earth’s surface is believed to harbor oil and gas reserves equal to 22 percent of the world’s undiscovered, technically recoverable resources.

The photographic image in the animation above is a mosaic of satellite pictures, captured on June 28, 2010, of a mostly cloud-free Arctic. Greenland, with its white ice sheets, is at upper right, and the Arctic Ocean is mostly covered by slightly bluish sea ice. The map shows locations and suspected volumes of undiscovered oil in the Arctic region — a huge potential resource that could become more accessible as the Arctic continues to warm. Please click on the image for a larger version. (Satellite mosaic: NASA Earth Observatory; Map: USGS.) Espen Barth Eide, Norway’s Minister for Foreign Affairs, noted this reality in his speech to the 2013 Arctic Frontiers conference. Every conference should begin with the acknowledgement that “climate change is bad news,” he said, and that “we are not rejoicing the fact that ice is retracting.” Then came a deft pivot: "The Arctic is not a source of climate change, but it is an area where climate change can be seen.” And this, he noted, opens new opportunities for growth.”

Espen Barth Eide at the 2013 Arctic Frontiers conference. (Photo: ©Tom Yulsman) My interpretation: Don’t blame us for what’s happening — or for taking advantage of those opportunities. This year’s Arctic Frontiers conference began today, Monday, January 18. The climate and energy theme captures the polar paradox idea perfectly. I suspect, however, that it was chosen before a petroleum glut teamed up with soft demand to send oil prices spilling from almost $110 a barrel in June to only $48 on January 11th. This is the lowest level since the global economic crash in 2008. So we’ve come a long way since 2013. The collapse in the price of oil has occurred in part because of surging production here in the U.S. (including near where I live in Niwot, Colorado). And that has made exploitation of Arctic energy resources look less economically attractive, at least temporarily. Moreover, since 2013, other factors have dimmed prospects for Arctic development as well. For one thing, some Norwegians apparently are becoming ambivalent toward Statoil, a Norwegian multinational oil and gas company, as activists, academics, artists and even politicians raise environmental concerns. This is a big deal here in Norway —which has become a very wealthy country thanks to revenues from its large oil and gas reserves. I'll have more to say about this in a subsequent post. Suffice it to say now that Norwegians are debating whether Arctic fossil fuels should be left in the ground to mitigate global warming. The challenges of operating in the harsh environment of the Arctic are also becoming clearer — something that oil giant Royal Dutch Shell has learned in very dramatic fashion. On a sunny day in June of 2012, a convoy of Shell vessels set out for the Arctic off the coast of Alaska, part of an effort to anchor a drilling rig to the seafloor 600 feet below. The rig, called the Kulluk, would be towed to the Arctic Ocean above what Shell hoped would be a rich deposit of oil. Shell was placing its bets on global warming. Thanks to emissions of greenhouse gases from combustion of the fossil fuels that it and other energy companies bring to market for us, the Arctic and surrounding areas are warming faster than any other. This is a trend that began 30 years ago and has continued to the present, according to the latest “Arctic Report Card” released by the U.S. National Oceanic and Atmospheric Administration late in 2014. That warming has caused Arctic sea ice to thin and retreat in summer. It reaches its annual minimum during September. According to the U.S. National Snow and Ice Data Center, "Through 2014, the linear rate of decline for September Arctic ice extent over the satellite record is 13.3% per decade, relative to the 1981 to 2010 average. The ten lowest September ice extents over the satellite record have all occurred in the last ten years.” Music to Shell’s ears, no doubt. (Not to mention Statoil’s.) But warming temperatures and shrinking sea ice still do not make places like the Beaufort Sea, where the company hoped the Kulluk would find oil, or the Bering Sea and Gulf of Alaska, through which the Kulluk would have to be towed, climatically benign. Far from it. Shell would learn this when the entire operation turned into an unmitigated disaster (as documented in a recent New York Times Magazine story). After a series of mishaps over the course of months, a tugboat towing Kulluk through 35-foot seas in the Gulf of Alaska had to cut loose. Pushed by winds and waves on New Year’s Eve 2012, the Kulluk foundered on the shore of Sitkalidak Island. Shell’s dreams of exploiting fossil fuels in the Arctic foundered there too — at least for now.

The Kulluk drilling rig after it ran aground on Sitkalidak Island, Alaska, in 40 mph winds and 20-foot seas on Tuesday, Jan. 1, 2013. (Source: U.S. Coast Guard) I recall discussion about the disaster at the conference last January, but also eager talk of development from Norwegian Prime Minister Erna Stoltenberg. “The climate is warming faster here than in any other part of the world,” she said. “The melting of the Arctic sea ice, and rising demand for commodities such as energy and minerals are creating new economic opportunities." Will that same “polar paradox” idea — one characterized by a contradiction — be the gestalt of this year’s conference? Or will a related meaning of “paradox” begin to take over? In Latin, from the Greek, para means contrary or distinct from. And doxon means opinion. So will this year’s conference emphasize ideas contrary to the enthusiastic opinions of the past? I look forward to finding out.

A similar version of this commentary was published today in Tromsø's Nordlys newspaper. You can find it here (in English and Norwegian).