The Search for Life Trapped Under Antarctica's Ice 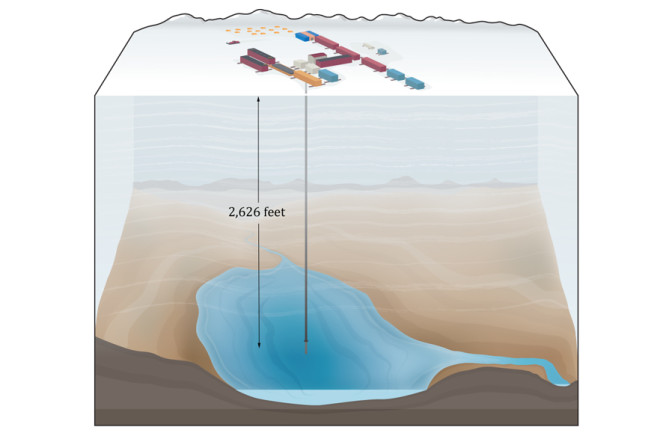 A drill cut half a mile through the Antarctic Ice Sheet to subglacial Lake Whillans in January 2013. | Kellie Jaeger/Discover

In January, climatologist Vladimir Lipenkov laid a disk of ice onto a light box in an Antarctic lab. The ice sparkled in a kaleidoscope of reds, blues and yellows as light scattered through trapped gas bubbles.

His Russian scientific team had finally accomplished its elusive goal: retrieving the purest sample yet from Lake Vostok, an Antarctic body of water that has likely been locked beneath thousands of feet of ice for up to 15 million years. They are now testing that frozen water — which comes from a place Lipenkov says is unlike “any other environment on our planet” — for signs of life.

For years, teams of scientists in the Antarctic have plotted to drill into the continent’s vast subglacial lakes, hoping to find life that has been isolated for eons. They have faced many challenges, including weather delays and equipment breakdowns.

A drill finally penetrated through the ice to Vostok’s waters in February 2012, and samples were obtained from water that froze on the drill. In March 2013, biologist Sergey Bulat of the Petersburg Nuclear Physics Institute announced that this ice hosted a new form of bacterial DNA, but his claim was disputed because the sample was contaminated with kerosene drilling fluid.

Lipenkov, on the same team but from the Arctic and Antarctic Research Institute in St. Petersburg, hopes the cleaner water obtained this year will settle the controversy. And ongoing analysis of the new sample’s air bubbles could confirm a tantalizing theory: According to Lipenkov, Vostok may hold 50 times as much oxygen per gallon as seawater — a level toxic to most life.

“If there is microbial life in the lake, it should be something unusual,” says Lipenkov. High levels of oxygen likely accumulated in the lake over millions of years as glacial ice melted, injecting trapped gases from air bubbles into its waters.

January 2013 also brought another milestone: An American team penetrated 2,600 feet of ice to reach Lake Whillans, another subglacial lake in Antarctica. Scientists there were able to begin analyzing the lake water as soon as a sample was lifted out of the borehole.

Within hours, they found bacterial cells, more than 450,000 per teaspoon. Deprived of sunlight, some of these bacteria may instead eat iron and sulfur minerals generated as glaciers grind up the bedrock, says Jill Mikucki, a microbiologist at the University of Tennessee in Knoxville who helped sample the lake.

Life forms in Whillans and Vostok could help researchers understand what kind of life might survive on other worlds. Subglacial lakes provide earthly analogs of ice-covered oceans deep beneath the surface of moons orbiting Jupiter and Saturn.

By discovering what kind of life inhabits Antarctic lakes, John Priscu — a microbial ecologist at Montana State University in Bozeman who is analyzing samples from Lake Whillans — hopes to understand what sort of technology will be needed when probes are eventually sent to those frozen moons. In Lake Whillans, says Priscu, “we have an excellent model to draw a fairly strong hypothesis of what [life] we might find in another icy world.”

[This article originally appeared in print as "The Search for Life Trapped Under Ice."]