Just something to keep in mind when European paleogenetics may be measured by the Sardinian. 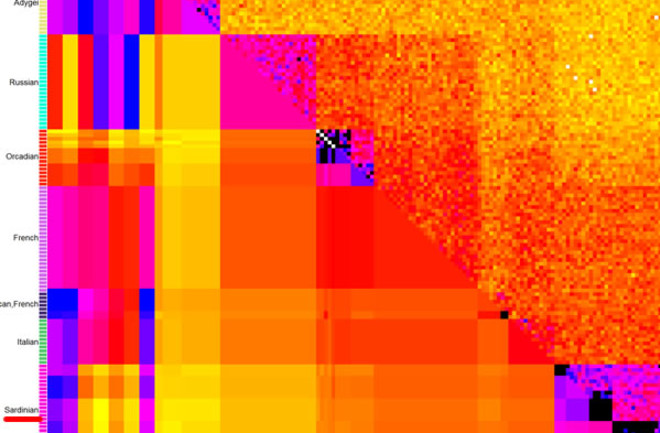 I cropped the image above from the paper Inference of Population Structure using Dense Haplotype Data. The main reason was emphasize the distinctiveness of the Sardinian cluster, on the bottom right. As you can see this population exhibits a lot of coancestry across individuals.

This isn't too surprising, Sardinia is an island, and islands are often genetically distinctive. Random genetic drift prevents populations from diverging through gene flow, but water is a major impediment to gradual isolation by distance dynamics. The original Sardinians are naturally going to diverge from mainlanders over time, and begin to share the same set of common ancestors in the recent past, because their space of reasonable mating possibilities is constrained. The other population which is similar in the heat map above are the residents of the Orkneys, off the north coast of Scotland (the Orkneys has a much smaller population than Sardinia, but, it is also much closer to the mainland).

This is on my mind because Dienekes has a long post where he explores the D-statistic results of various European populations, using Sardinians as one of the references. You don't need to know the details, just that Northern European populations seem to exhibit an affinity to East Asians.

Our favorite human genomicsts at Broad highlighted this tendency, and Dienekes went looking (if David Reich et al. were inclined toward mischief they should just posit some crazy scenario, and see if Dienekes assembles the requisite data set!). Which is all fine, and we'll see more of this in the near future. It isn't as if others aren't using Sardinians.

If you play around with model-based clustering packages (e.g., ADMIXTURE, STRUCTURE, etc.) or PCA the distinctiveness of the Sardinians does jump out at you. In short they are the least Asian of the European populations. If there is a cline, they generally define one of the antipodes of the cline (often, along with the Basques). They're a natural reference. But we need to be cautious. On occasion a reader has casually asserted that understanding the relationships between populations is easy enough, just find appropriate reference groups. Easier said that done.

A few years ago there was a great deal of debate whether the Sardinians were Neolithic "newcomers" or the descendants of Paleolithic populations. The latter is actually somewhat conjectural in regards to archaeology. There is some evidence of Paleolithic habitation, but it is fragmentary, implying perhaps very low population densities, and likely local extinctions over time. The reason the argument roiled for so long is that if Sardinians are the descendants of Paleolithic Europeans you have the perfect reference.

But what if they're not? I think that question is up in the air, especially in light of the fact that Ötzi the Iceman has affinities to the Sardinians. Ötzi was a mainlander, and an agriculturalist. That does not preclude descent from a common Paleolithic Western European population which adopted agriculture, but I think it tilts us more toward some sort of demographic expansion (likely from the Eastern Mediterranean, but perhaps a secondary expansion from somewhere in the Western Mediterranean).

Ten years ago we were looking at a two-factor model. Europeans the Ice Age hunters, or Europeans the Middle Eastern farmers. Today the past is much more crisp, and yet that crispness has unveiled a befuddling complexity. If I had to put money down I would bet that in another ten years we'll have to add into our understanding both demographic pulses during the Ice Age, and multiple ones which post-date the Neolithic. It may be that the signals of a relationship between Northern Europeans and the First Americans is very old, and dates back to the Gravettian culture, which spanned Western Europe eastward toward the fringes of the Black Sea. With ancient DNA I believe that we'll get a sense of who the "First Europeans" were, and it may be that their genetic contribution to modern Europeans is in the same range as the Neandertals whom they assimilated and exterminated!

All something to keep in mind in the coming years, when European paleogenetics may be measured by the Sardinian...