The Rich Allure of a Peasant Champion

ABC Carpet & Home, for the uninitiated, is a sumptuous home furnishings mecca with a chic interior and socially conscious ethic. The flagship store in Manhattan's Flatiron district feels like a plush museum owned by a billionaire with a New Age affectation. 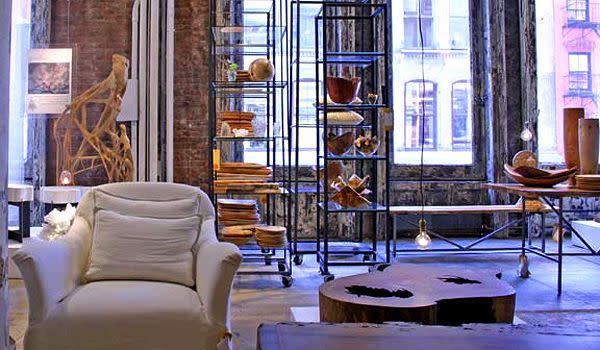 Reproduced antiques, decorative trinkets, candles, ethnic-themed clothing, Buddhist ornaments and much more are arrayed stylishly across six floors of a century-old building. The offerings are beyond the means of most browsers, but as one helpfully points out

, you can snag the $500 vintage peasant blouse much cheaper on Ebay or Etsy. The cavernous store is a masterful mix of hedonistic pleasures to ogle. "I can’t afford to buy a darn thing at ABC Carpet except for spiffy soaps, but I sure do love trolling the floors here, as the goods on offer are simply exquisite," writes Pauline Frommer in her review

. Even the display windows are exquisite, such as the recent ones 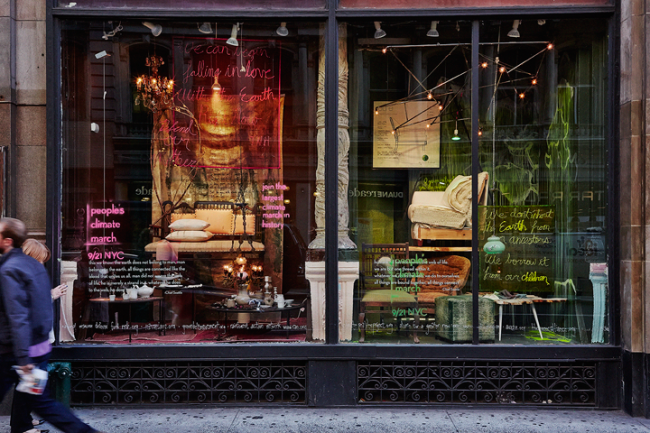 ABC Carpet & Home proudly says it is "committed to trailblazing environmental work that alleviates the pressures triggered by climate change." It's not clear

what pressures the store is referring to, but that doesn't mean you shouldn't admire its eco-sensibility. As New York Magazine raved

Perhaps you can better appreciate these earth-friendly accessories after you sink into a cushy, $3,495 swivel chair

, it should be no surprise that Vandana Shiva, a global environmental icon and champion of peasant traditions, has been the guest of honor numerous times in glittering events held at the Manhattan store. In 2012 she shared the stage with Deepak Chopra, a popular New Age guide. According to the store's blog

Chopra and Shiva interwove the talk between the gifts and curses of science. Every agricultural problem, local to global, that has attempted to be resolved with science has created a problem by the very capacity of that science – global warming, mutated seeds, toxic soil. “What moves life around is nourishment, not money,” said Shiva. “When nourishment is replaced with toxins, what moves around is death” – making the colonization of seed literally a life or death situation.

Shiva, for those unfamiliar with the Indian enviromentalist, is best known for her anti-GMO activism, including claims she has popularized that myself

have inspected closely in recent years. The most thorough examination of Shiva's activism was done

several months ago by Michael Specter in The New Yorker. Shiva is not accustomed to being challenged by journalists. She has grown used to the "rock star" treatment accorded

to her by Bill Moyers, Amy Goodman

, and her many other admirers in the media. Perhaps that's why Shiva was especially perturbed at Specter's feature article (which science journalism professionals lauded

. So when I heard that Shiva was again speaking at ABC Carpet's Manhattan store this week, I thought it would be interesting to hear what she had to say about biotechnology and agriculture. Would she repeat the same claims that have already been demonstrably debunked

, such as the one about Monsanto's GMO cotton driving a quarter million Indian farmers to suicide? Would she address the nagging doubts about her truthfulness raised by Specter in his piece? I'll answer those questions in a minute. First, it's worth noting how beloved Shiva is in circles where environmental activism, new age beliefs, and idealization of nature intersect. The audience of about 75 people seemed to be drawn from these three spheres. One woman I spoke with told me she worked in the personal development field (also known as self-help). Her speciality: "intuitive counseling." She didn't know much about Shiva, but after reading a description

of the event, "I felt I had to be here," she said. Another attendee, a lanky young man with a long goatee, said he came because he was apprenticing in what he called "biodynamic agriculture." I asked if this was organic farming. "It's beyond organic," he said. "It's spiritual farming, its soil shamanism." It was a tool to heal the land of environmental damage, particularly from GMOs, "which made the soil infertile," he said. Biodynamic agriculture "utilized the energy vortex" to reinvigorate earth. "It helps the soil recover from depression," he added. Shiva, who frequently writes and speaks about the harms of industrial agriculture and GMOs, was in her element. She was introduced by Amy Chender, COO and Director of Social Responsibility for ABC Carpet & Home. Chender said to the assembled that it was "an honor" to welcome back Shiva, who has "been visiting us for many years." She ticked off Shiva's many accolades, including how she "has been likened to [Mahatma] Gandhi." Chender also informed us of some recent news: The Harmony Foundation had just given Shiva its Mother Teresa award. This is why Specter's critical article of Shiva has been met with such disapproval in eco-friendly circles. He deconstructed the life of a saintly figure who is thought of by many as a cross between Gandhi and Mother Teresa. Talk about a thankless assignment! As for Shiva, her latest visit

, Sacred Seed, a collection of essays on "the poignancy of the seed," whatever that means. Shiva did not disappoint her audience, who as I had observed in another talk of hers I attended

several years ago at the Brooklyn Botanical Gardens, were enrapt. She spoke at length about the sacredness of nature and explained why she had devoted her life to defending seeds. This was her mission, her calling. "Seed is the first link in life," she said. It represents a sacred compact with nature. GMOs, she went on to say, perverted that relationship. What does it mean "when I say what is a GMO?" She then answered her own question: "It is, creation and God move over." This was a "violation" of the natural order. Shiva also talked about "biopiracy" (this is how she refers to the patenting of seeds by biotech companies), and--sigh--the "291,000" Indian farmers who committed suicide since GMOs were introduced. "Most are in the cotton belt," she said, alluding to states in India where genetically engineered cotton crops are grown. This is simply untrue (GMOs being the cause of the suicides), but Shiva has repeated it so often over the years that I think she has convinced herself it is true. During the talk, Shiva presented herself as an advocate for peasant farmers, who she describes as living in harmony with nature. It was the peasant community in India, she recalled, that made her appreciate the purity of seeds. Her affinity and respect for the peasant farmer is unmistakable. It is a theme of her nature-centric philosophy. She is often heralded

as a tireless "defender of the poor," someone who "has courageously taken her stand among the peasant farmers of India." Let it be noted, however, that this champion of the downtrodden doesn't exactly live a peasant's lifestyle. 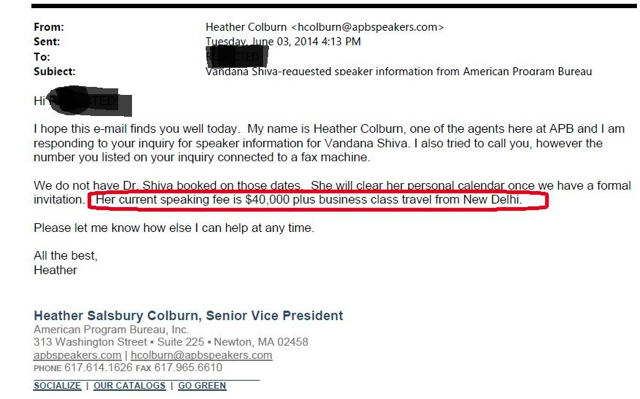 If you'd like to learn what qualifies Shiva for a typical $40,000 speaking fee, here is how

her representatives package her. Judging by Shiva's busy globe-trotting schedule, it would appear that she is in much demand. For example, next week she travels to Arizona State University's Global Institute of Sustainability, where she will give a lecture

titled, "Future of food: Democracy or dictatorship." The event is sold out. Several days later, she'll travel back across the USA to Vermont to speak

in support of the state's new GMO labeling law. The week after that she'll be in Louisville, Kentucky, slated

as a feature speaker for an event organized by the "Slow Money" network. This is just a small sampling of Shiva's non-stop international speaking schedule. Is it fair to ask: When does she find time to commiserate with peasants toiling on the land, the people who she is speaking on behalf of? At the ABC Carpet & Home event Shiva headlined this week, I didn't see much evidence of peasantry in the audience. There was, however, a lot of passion about GMOs, the sanctity of seeds, and also anger about a corrupted media, including journalists Shiva at one point said were "writing fictions about me." That belief was echoed by audience members in the Q&A session, when one white haired woman stood up and angrily said that "we in the U.S. have our brains scrambled." Respectable science outlets, she complained, were publishing articles saying that GMOs were safe to eat. She specifically cited Discover magazine and the New York Times. Then she dropped a bomb: "Revkin at the Times is bought off!" My ears perked up. She was referring to Andy Revkin, the highly respected journalist who reported on climate change and other environmental issues for years at the Times, until leaving in the late 200os to teach at Pace University and write for Dot Earth

, a popular blog he created for the paper's website. After the Shiva talk officially concluded, I approached the woman, an environmentalist who focuses on water issues, and asked what proof she had that Revkin was being bought off. "He wrote an article saying GMOs are safe and everybody believed it," she responded. But how does that prove he was paid by the biotechnology industry? She didn't say, but she was still sure it was true. Even though she made this charge in public, the woman asked that I not reveal her name. (But I'm going to pass her contact info on to Andy, if he'd like to follow up with her.) Then she asked who I wrote for. Discover magazine, I said, trying to keep a straight face. I don't know what to make of the people who view Shiva as a saintly eco-warrior and uncritically accept everything she says. But I am certain that she gives them what they want to hear.