The Pope's Encyclical is Out, and so is the Verdict on 2015's Climate so Far: Warmest on Record 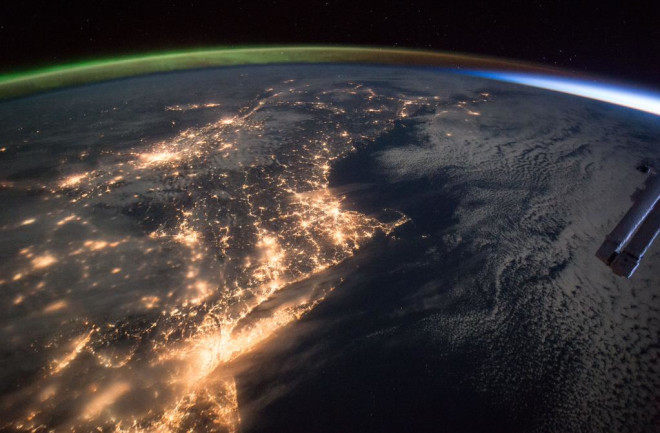 The highly populated northeastern U.S. as well as parts of Canada are visible in this photograph taken by an astronaut aboard the International Space Station in early May, 2015. Why use it for a story about global warming? Please see below... (Source: Fragile Oasis/NASA/Astronauts of the International Space Station) As heated debate swirled around Pope Francis's call today for action on climate change, new data on Earth's climate were released. The verdict: record warmth. Earth just experienced its warmest March through May on record, according to the the data released today by the National Oceanic and Atmospheric Administration. The year-to-date was also the warmest January through May period on record. And so was the month of May itself. NOAA's assessment of the climate in May differs slightly from one released by NASA earlier this week, which found that the month was in a tie for second warmest. Different methods for calculating Earth's average temperature account for the discrepancy, which is relatively small.

Last year was the warmest on record so far. This year is running considerably warmer than 2014 did by this point, driven in large measure by record warmth across much of the equatorial Pacific, as well as parts of the equatorial and southern Indian Ocean, and up in the Barents Sea north of Scandinavia. Given 2015's record warmth so far, along with the ongoing El Niño, we could very well be looking at another record-breaking year by the end of December. (In a story at Mashable today, Andrew Freedman quotes a NOAA scientist as saying that such an outcome is likely.) SEE ALSO: El Wimpo Transforms Into an El Niño That's Showing Increasing Signs of Being a Humdinger That brings me to the photo at the top of this post: Why run an image of a major part of the northeastern megalopolis of the U.S. and Canada, photographed at night from the International Space Station?

Source: NOAA I could have led with the image to the right (please click to enlarge it). The map shows how temperatures have varied from the long-term mean during 2015 so far. But I ran a similar image with Tuesday's post about NASA's monthly climate assessment. So I wanted to do something a little different this time — something that visually ties our human activities to the Earth's thin atmosphere in a compelling way. I found what I was looking for on the Twitter feed of Fragile Oasis. More about them in a minute. But first, the photograph: Shot from the International Space Station in May, it shows the most densely populated part of the United States and Canada. New York City and Long Island are at the bottom of the image. North of the New York metro area, the bright lights of Montreal are visible. And you can see Cape Cod and Boston about half way up in the photo toward the right. It takes a lot of energy to keep all those lights on, and most of that energy is still produced by burning fossil fuels. Even so, it is rightfully difficult to fathom how we could have as profound an impact on the atmosphere and thereby Earth's climate system as Pope Francis spells out in his encyclical. Somehow, though, the connection between human activities, the atmosphere, and our climate just seems very palpable in this image. I think it's because those lights are juxtaposed with the clearly visible atmosphere — which is glowing green toward Earth's limb thanks to the aurora borealis. As for Fragile Oasis, source of this spectacular image, here is how they describe themselves:

Guided by the unique orbital perspective of men and women who live and work in Space, our vision is for Fragile Oasis to help people and organizations work together to overcome the challenges facing humanity on Earth.

That's the vision of of astronauts aboard the International Space Station who "orbit Earth every 90 minutes at a speed of 17,500 miles per hour, keeping an eye on our Fragile Oasis from their orbital perspective." I thought it would be a fitting counterpoint to some of the political hyperventilation that the official release of the Pope's teaching on the environment, our relationship to it, and to each other has engendered. An example: Marc Morano saying he sees "an unholy alliance" between Pope Francis and the United Nations, and that "the media loves it because he sounds a lot like Al Gore in this encyclical." Bleh. I much prefer inspiring photos of Earth from space instead.