How destinations like The Wave, located near the Arizona-Utah border, are managing overtourism. 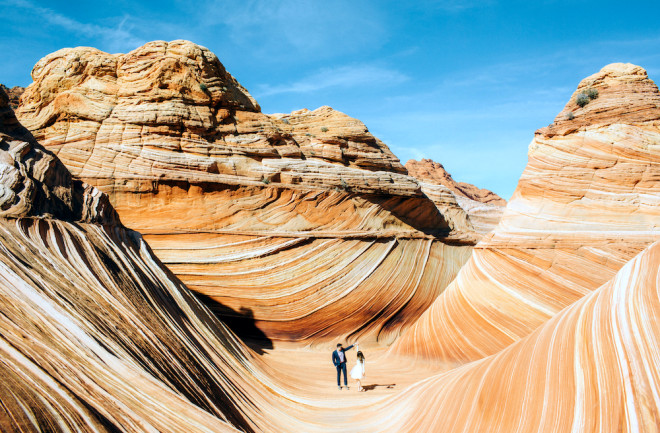 You may recognize this water-and-windcarved Navajo sandstone. Countless humans first saw it in 2009, when Microsoft featured The Wave on desktop wallpaper for Windows 7. Then in 2010 came Instagram, where you now can find thousands of hashtagged and geo-tagged images from this remote spot near the Arizona-Utah border. That’s how a far-flung site, known only by locals and a handful of adventurous souls, can catapult into fame.

Social media has repeated this effect on many natural spaces around the globe, often sparking overtourism — when excessive traffic can cause site degradation. The Wave has historically avoided that with a strict permit system managed by the U.S. Bureau of Land Management.

For decades, just 20 visitors per day have been allowed in this Coyote Buttes North section of the Paria Canyon-Vermilion Cliffs Wilderness Area. That means when 200,000-plus people entered the lottery for a permit in 2018, only 3.6 percent scored a lucky ticket. At $9 per application, this approach to conservation helps sustain terrain and landmarks far into the future. It also preserves a wild experience for visitors, who still hike 6 miles minimum through high desert, with no defined trail, to reach The Wave.

But the rules are changing. Officials this year opted to more than triple the number of permits (64 per day). The decision followed a formal review process and public comment period that drew mixed input from some 1,500 government officials, environmentalists, tribal organizations and others.