Scientists find a way to use the sun’s energy to pull carbon dioxide from the air and turn it into fuel. 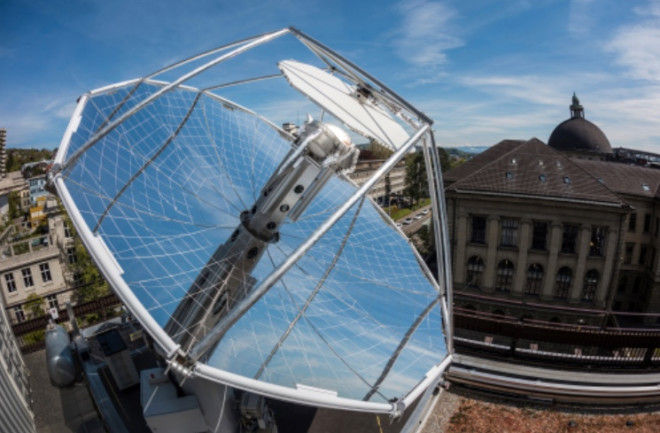 On the roof of the Swiss Federal Institute of Technology, this heliostat array focuses sunlight on a reactor that can turn carbon dioxide from the air into fuel. (Credit: Allessandro Della Bella/ETH Zurich)

This story appeared in the July/Aug 2020 issue as "The Other Solar Power." Subscribe to Discover magazine for more stories like this.

Few activities swell our carbon footprint quite like flying. A one-hour flight on a twin-engine jet aircraft burns almost 6,000 pounds of kerosene and adds almost 19,000 pounds of carbon dioxide to the atmosphere. The environmental impact of air travel is so stark that Swedes even have a term for it: flygskam, or flight shame. But what if flying could be made zero carbon?

“We have developed a solar technology that is able to produce liquid fuels using just two ingredients: solar energy and ambient air,” says Aldo Steinfeld, a renewable energy expert at the Swiss Federal Institute of Technology. “These hydrocarbon fuels release only as much carbon dioxide during combustion as was previously extracted from the air.”

It may seem like alchemy, but the solar refinery Steinfeld has helped build in Móstoles, on the outskirts of Madrid, follows some straightforward chemistry. An array of mirrors called a heliostat tracks the sun, boosting the sunlight’s intensity by a factor of 2,500 while reflecting it onto a 50-foot-high tower.

This dazzling beam of light heats a reactor with a core made of cerium oxide, an inexpensive compound often used to polish glass. At 2,700 degrees Fahrenheit, oxygen is liberated from the cerium and removed, after which water and carbon dioxide captured from the air are injected into the reactor. As the reactor cools, the reduced cerium claws back oxygen molecules from the added material, leaving a mixture of hydrogen and carbon monoxide called syngas. This is funneled into a second reactor, where the syngas is converted into kerosene molecules. In June 2019, the Móstoles refinery announced its first trickle of fuel.

But why turn solar energy into fuel at all? While road and rail transport are open to electrification, existing battery technology does not pack the punch needed to drive heavy industries such as sea freight and air travel. “There is no way around jet fuel for long-haul commercial aviation,” says Steinfeld. “Can you imagine a Boeing or Airbus flying trans-Atlantic on batteries? I think it violates the laws of physics.”

Solar kerosene has the potential to slot into existing global infrastructure for storing, transporting and using fossil fuels. But it still can’t compete with them for price: It would likely ring up around $9 per gallon if it’s sold to consumers. But that cost should fall as the technology improves in efficiency and grows in scale. Steinfeld believes that, with a modest boost in current efficiency, solar refineries could supply the entire world’s jet aviation fuel demand with a heliostat array the size of Indiana.

This revolution is underway. Last May, a major airport in the Netherlands announced it would host the world’s first plant turning atmospheric carbon dioxide into liquid fuel. Climeworks — a company spun out from Steinfeld’s lab in 2009 — is providing the modules that will capture carbon dioxide from the air.

And what of our flygskam? “If the jet fuel is produced from sunlight and air, then there is nothing to be ashamed of because the carbon footprint would be zero,” says Steinfeld. “A true sustainable process.”

Frank Swain is a science writer based in Barcelona, Spain.