The Other Big Drought Story You Need to Pay Attention To

Watch the water disappear from the northern reaches of Lake Powell in this animation consisting of natural-color images taken by the Landsat series of satellites in spring between 1999 and 2014. The first image, from March of 1999, is labeled. It pauses for an extra second, as does the final image in the series, from May 2014. (Source: NASA Earth Observatory) With California's scary, record-breaking drought capturing so much attention lately, an important bit of news about the dearth of water across a much larger region has gotten short shrift. I'm talking about the Colorado River Basin, which supplies water to 40 million people in seven states — including Californians. Over the long run, the Colorado has been providing less than it once did, even as demand for its water has risen. And this year, as in most years during the past 15, the water situation in the river basin is not looking good. 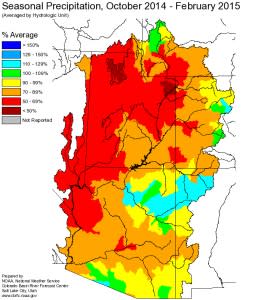 Click on the map at right to see how rain and snow between October and the end of February shaped up. See all that red, orange and yellow. Not good... Barring a miracle in March and April, meltwater cascading out of the snow-capped high country of the Colorado River Basin this spring will probably fall below average. According to the Colorado Basin River Forecast Center, flows into Lake Powell, one of two giant reservoirs on the Colorado, are likely to be just 71 percent of the long term average. The predicted lackluster flow of water into Lake Powell will, in turn, have a ripple effect downstream to Lake Mead, the second giant reservoir on the Colorado River. In fact, barring intervention, by the end of the water year on September 30th, the reservoir's surface elevation is projected to fall below 1,075 feet above sea level, according to the U.S. Bureau of Reclamation. And that would smash last year's record low set in July. To compensate, the USBR will probably release additional water from Lake Powell. But this is a zero sum game, because water releases from Powell will only reduce how much water it will hold in storage. You can take resources out of one savings bank and deposit it in another. But that has no effect on how much money you have. At the end of the day, you're just as poor. And over time, our hydrological savings have been dwindling. Lake Powell is now at just 45 percent of capacity. And Mead is at 41 percent. I suppose that's better than the situation in California, which has just a year's worth of water left in storage. But as a Westerner, I still find this pretty alarming. 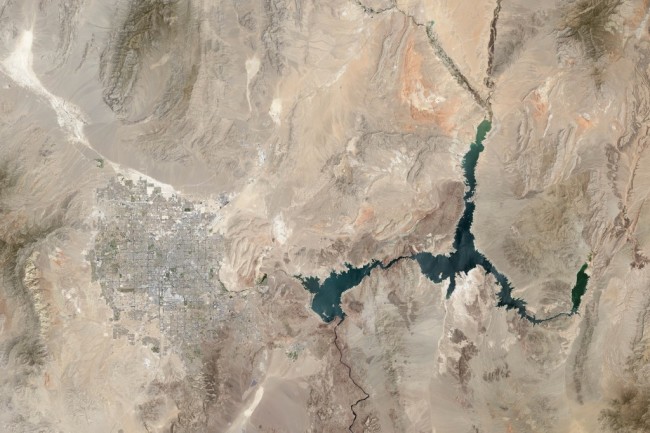 Las Vegas, to the left, and Lake Mead, to the right, as seen on July 21, 2014 by the Landsat 8 satellite. Lake Mead reached a record low water level that month. (Source: NASA Earth Observatory) The problem, in a nutshell, is this: The Colorado's flow once dazzled, like Old Faithful in Yellowstone. But today the geyser has become enfeebled. Here are the sobering details from a report by the Bureau of Reclamation:

In the parlance of water managers, "maf" means "million acre-feet." One acre-foot is about 325,000 gallons, or enough to supply the needs of roughly two households for a year. Whatever the parlance, it's clear that we've got a problem. And it is likely to get worse. Much worse. 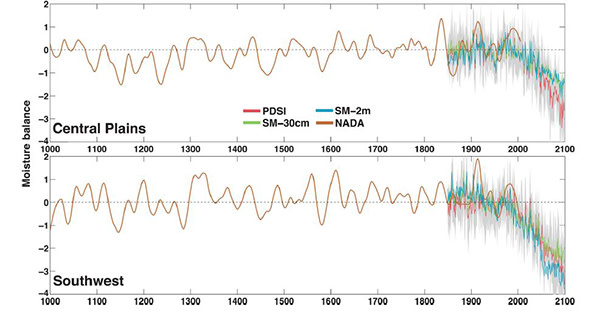 A representation of the summer moisture in the U.S. Central Plains and Southwest. The brown line represents the variation in dryness since the year 1000, based on data from the North American Drought Atlas; the lower the line on the graph, the drier the conditions. Colored lines to the right side of the graph represent what climate models see ahead: a trend toward dryness not seen in the previous millennium. (Source: Cook et al., Science Advances, 2005) See those plunging trendlines? That's the projection for soil moisture in the Central Plains and Southwest out to 2100. It comes from a study that combined data from tree rings, which provide a glimpse at past climates, with projections from 17 different climate models to analyze the future impact of rising average temperatures. The results are sobering. During the second half of the 21st century, both the Southwest and Great Plains of the United States are likely to experience persistent drought worse than anything seen 1,000 years. The cause: us. As the authors of the study put it:

Our results point to a remarkably drier future that falls far outside the contemporary experience of natural and human systems in Western North America, conditions that may present a substantial challenge to adaptation.

Seen in this context, California's plight is part of a much bigger picture.