The Northeastern U.S.: Carved and Etched by Glaciers; Painted by Sunlight 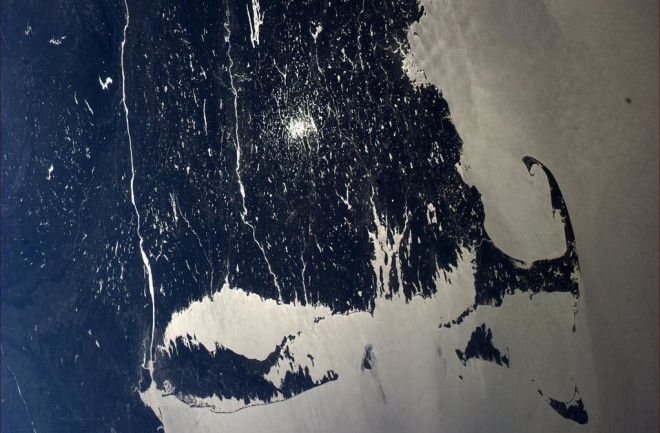 In a photograph captured from the International Space Station, New York City and Long Island stretch along the bottom and Cape Cod juts out to the right. (Source: Astronauts of the International Space Station/NASA) I thought I'd share some sweet eye candy to help ease us into the weekend — a photograph shot from the International Space Station in mid-April showing the glacially carved and etched landscape of the Northeastern United States. Evidence of the role of moving glacial ice is readily apparent. Stretching along the bottom of the photograph, Long Island is essentially an elongated mound of rubble pushed down from the north by the Laurentide Ice Sheet of the last ice age. It marks the farthest advance of the ice sheet about 22,000 years ago. Follow Long Island from the left to the right, and let your eyes keep going. Toward the bottom right you'll find two island: Martha's Vineyard and Nantucket. Like Long Island, these are remnants of the rubble pile, or terminal moraine, pushed up by the ice sheet. Just above the islands, Cape Cod is also the handiwork of the ice. It consists of rocky debris deposited by different lobes of the Laurentide Ice Sheet. Also visible in the photograph are two long rivers glinting in the sunlight: the Hudson to the west (left), and the Connecticut to its east. Both have their origins in events that occurred long before the last ice age: the rifting apart of the giant supercontinent called Pangea about 200 million years ago, which opened the Atlantic Ocean. The wrenching apart of the Earth's crust caused stresses that opened up rift valleys. These were the progenitors of the two river valleys. Many millions of years later, the giant ice sheet graded and etched the landscape, and as it retreated north it left behind many signs of its passing in these two river valleys and throughout the region visible in this photo. If you're interested in more detail on the glacial geology of the Northeast, go here and here. Or just enjoy this beautiful example of Earth as Art.