By learning to draw fertilizer from a clear blue sky, chemists have fed the multitudes. they've also unleashed a fury as threatening as atomic energy 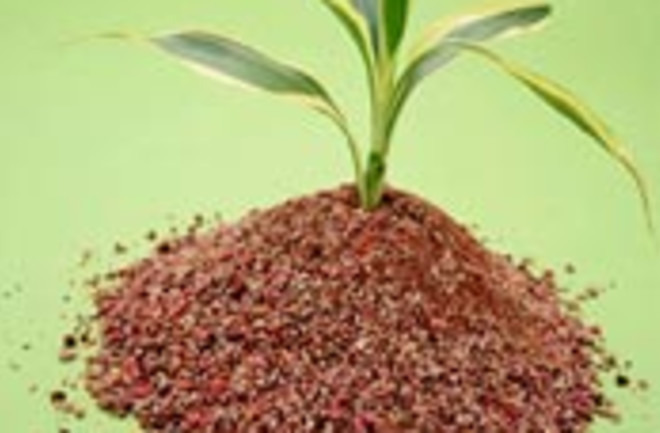 Nitrogen fertilizer and air are nearly enough, by themselves, to grow any modern crop. All this plant lacks is water. Photo by James Worrell

In 1898, Sir William Crookes called on science to save Europe from impending starvation. The world's supply of wheat was produced mainly by the United States and Russia, Sir Crookes noted in his presidential address to the British Association for the Advancement of Science. As those countries' populations grew, their own demands would outpace any increase in production. What then would happen to Europe? "It is the chemist who must come to the rescue of the threatened communities," Crookes cried. "It is through the laboratory that starvation may ultimately be turned into plenty."  The crux of the matter was a lack of nitrogen. By the 1840s agricultural production had declined in England, and famine would have ensued if not for the discovery that the limiting factor in food production was the amount of nitrogen in the soil. Adding nitrogen in the form of nitrate fertilizer raised food production enough to ward off disaster. But now, at the end of the century, the multiplying population was putting a new strain on agriculture. The obvious solution was to use more fertilizers. But most of the world's nitrate deposits were in Chile, and they were insufficient. Where would the additional nitrogen come from?

Nitrogen makes up nearly 80 percent of Earth's atmosphere, yet 20th-century Europeans nearly starved for lack of it Photo by James Worrell

Mass-produced Nitrogen made modern warfare possible. What other explosions lie ahead? Photo by James Worrell

Beefing up agriculture not only contaminates our water, it corrupts the air. As fertilizers build up in the soil, bacteria convert more and more of it into nitrous oxide (N2O). Nitrous oxide is best known as "laughing gas," a common dental anesthetic, but it is also a powerful greenhouse gas, hundreds of times more effective than carbon dioxide, and a threat to the ozone layer. Like a Rube Goldberg contraption designed to create and foster life on Earth, our ecosphere can apparently withstand little tinkering. Bend one little pole the wrong way, and the whole interlocking mechanism goes out of whack. Scientists around the world are working to reverse the effects of eutrophication, as the introduction of excessive nutrients is called. But while fuel-cell car engines and other advances loom in the near future, and chlorofluorocarbons have largely been replaced with safer chemicals, there is no such substitute for nitrogen. "An enormous number of people in the underdeveloped world still need to be better fed," says Duke University biogeochemist William Schlesinger, "particularly in India and Africa. When they come online agriculturally, sometime in the next 50 years, at least twice as much nitrogen will be deployed on land each year."  Improving the management of fertilizer is one good way to decrease runoff. If we can better understand exactly when crops need to absorb nitrogen, farmers can learn to apply fertilizer sparingly, at just the right time. "When application and uptake are coupled," says Schlesinger, "it minimizes the amount of runoff." In some watersheds like the Chesapeake Bay, farmers have reduced their nutrient runoff voluntarily. In other areas, farmers haven't had a choice: When the Soviet Union and its economy collapsed, fertilizer was suddenly hard to come by near the Black Sea. As a result, the hypoxic zone in the Black Sea shrank appreciably. Another, less drastic strategy for reducing the use of nitrogen is called "intercropping" and goes back to Roman times. By alternating rows of standard crops with rows of nitrogen-fixing crops, such as soybeans or alfalfa, farmers can let nature do their fertilizing for them. Intercropping could be a godsend to the developing world, where fertilizer is hard to come by. The difficulty is devising new plowing schemes, and farmers, like everyone else, are reluctant to abandon tried-and-true methods. But even successful farmers in the United States might be convinced. Aside from protecting the global environment— a somewhat intangible goal— intercropping could save them money on fertilizer. And farming areas are often most affected by groundwater contaminated by nitrates. Other researchers are developing natural processes to clean up our mess. Just as some bacteria can draw nitrogen from the atmosphere and expel it as nitrates, others can consume nitrates and expel nitrogen molecules back into the air. Denitrifying bacteria are too scarce to clean up all nitrogen pollution, but they could be used much more extensively. For example, some farmers in Iowa and near the Chesapeake Bay drain their fields through adjacent wetlands, where denitrifying bacteria are common, so that excess nitrogen is consumed before it reaches streams, rivers, and bays. Biologists willing to brave a slippery slope might want to go further, adding denitrifying bacteria to soil or water contaminated with nitrates. In the last few years several bacterial strains that might be useful have been identified. Why not genetically modify them to do exactly what we want? To anyone familiar with the ravages of invasive species worldwide, the danger is obvious.  Genetically modified microbes would have to be spread over large areas, making them hard to monitor. And in developing countries, where the need is greatest, there are few experts to do the monitoring. The specter of genetically engineered bacteria spreading beyond the targeted regions, and mutating into new strains, brings to mind a picture of biogeochemists in the 22nd century looking back on the halcyon days when people still had the luxury of worrying about nitrogen. Fritz Haber couldn't have imagined that he was altering Earth's environmental balance when he thought to heat up uranium, hydrogen, and air at high pressure. If we're not careful, our attempts to rectify that balance will only trigger another, even more destructive chain reaction. Haber's uranium was Oppenheimer's uranium in more ways than one.  A Short, Salient History of Nitrogen 1910 Kaiser Wilhelm II wants Germany to expand but lacks the necessary fertilizer and explosives for war. The missing ingredient: nitrogen. 1912 A brilliant young chemist named Fritz Haber discovers the keys to mass-producing nitrogen: high pressure and a uranium catalyst. 1956 Nitrogen-based fertilizer production is growing exponentially. In Minnesota, models in fertilizer sacks pose on a production line. 1980 Over the next decade, more man-made fertilizers, like this nitrogen-phosphorus-potassium mix, will be put on crops than were used in previous human history. 1995 The Alfred P. Murrah Federal Building in Oklahoma City is destroyed by a bomb made mostly of ammonium nitrate and diesel-fuel oil, killing 168 people. 2001 The Florida Everglades are slowly being choked by vast algal blooms as dairies and farms send their nitrogen- and phosphorus-rich runoff into the swamps. Native species such as periphyton, adapted to water with fewer nutrients, are being displaced by exotic plants such as cattails, melaleuca, and Australian pine. For more about methemoglobinemia, or blue baby syndrome, see the Environmental Protection Agency report "Is Your Drinking Water Safe?" (Publication No. EPA 810-F-94-002, May 1994), which can be found at: www.epa.gov/region5/drink.html. For further information, contact EPA's Safe Drinking Water Hotline: 1-800-426-4791.  For more about threats to the Everglades's rare subtropical ecosystem, see the National Parks Service Web site, "Can the Everglades Survive?" at www.nps.gov/ever/home.htm. To learn more about the EPA action plan to control eutrophication in the Gulf of Mexico's "dead zone," see www.epa.gov/msbasin/actionplanintro.htm. Read the speech given when Fritz Haber won the 1918 Nobel prize in chemistry for his work on ammonia synthesis: www.nobel.se/chemistry/laureates/1918/press.html.