The Nile as Seen From Space: A Glowing Ribbon of Life 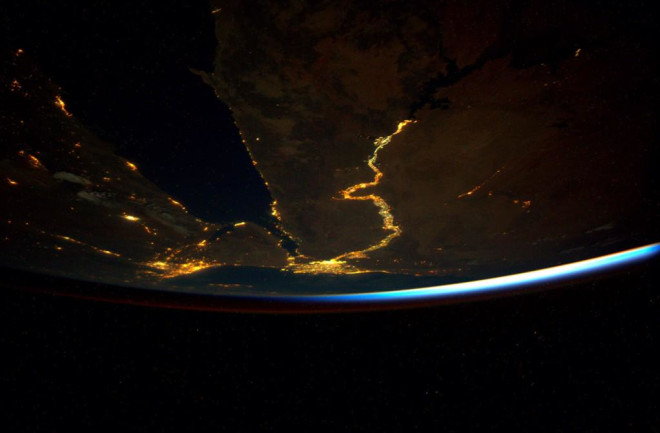 The Nile River at night, as photographed from the International Space Station by astronaut Scott Kelly. I wasn't intending to post anything on a Sunday night, but I happened on this mind-blowing photograph shot and posted to Twitter by Scott Kelly from the International Space Station. So I just had to share it. You're looking at his astronaut's-eye-view of the River Nile, all aglow at night. In this inverted view, North is toward the bottom of the frame, south toward the top. The Nile flows from the heart of Africa in the upper right quadrant to the dark Mediterranean Sea. Near where the Nile empties into the Mediterranean you can see the bright glow of Cairo, and the intensively farmed and populated Nile Delta. Most of Egypt's population lives along the river, a green ribbon of life in a dry, relatively empty desert region. That population density is reflected in those glowing lights — which give out toward the border with Sudan. Nestled along that big looping bend in the river south of Cairo is the city of Luxor, site of ancient Thebes. Here are some of the most magnificent monuments of pharaonic Egypt — and the ancient world generally. Thebes was the capital of a united Egypt as long ago as 2040 BC. By conventional standards, the Nile is the longest river in the world. It flows 4,132 miles, from south of the equator all the way to the Mediterranean. It drains an area more than one third the size of the United States (including Alaska), and its basin takes in parts of 10 countries. More than 300 million people depend on it for their water. The photographer, Scott Kelly, began on a year-long mission to the International Space Station in March of 2025. Spacefaring runs in the family. His identical twin brother, Mark Kelly, is a former astronaut. The brothers are the only siblings to have traveled in space.