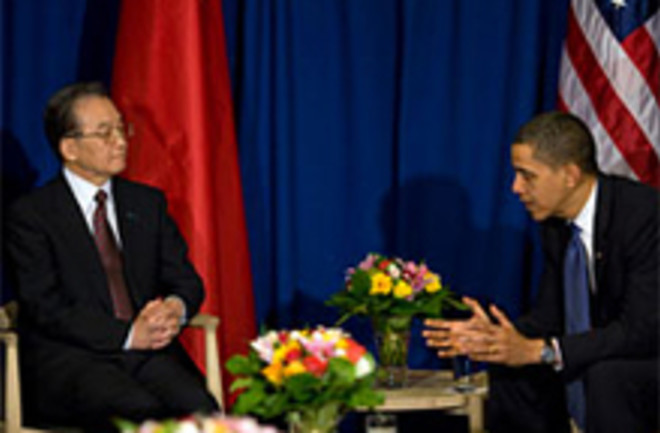 Let the Copenhagen fallout continue. Friday night, after a two-week diplomacy fest that could be called "difficult" at best, leaders of some of the most powerful countries in the world announced that they reached an 11th hour agreement to conclude the United Nations Copenhagen climate summit. After speaking to the assembly, President Barack Obama spent the day going in and out of meetings with Chinese prime minister Wen Jiabao. They met later with Mammoghan Singh of India, President Luiz Inácio Lula da Silva of Brazil, and South African President Jacob Zuma, before a White House official leaked that these big players had reached an agreement. Obama had flown to Denmark for the meeting's final day, hoping to snatch an agreement from the jaws of growing defeatism among those desiring a climate accord.

Obama's 15-hour, seat-of-the-pants dash through Copenhagen was marked by doggedness, confusion and semi-comedy. Constrained by partisan politics at home, and quarrels between rich and poor nations abroad, he was determined to come home with a victory, no matter how imperfect [AP]

. And the result was far from perfect. First, the nations assembled failed to meet a binding agreement, as many feared would happen going into the meeting. In addition, the document that remained at the end was the work of those five nations, which has now ignited a storm of protest around the world. Despite the fact that South Africa's leader was around for the 11th hour agreement, for instance, its climate representatives are now steaming mad.

South Africa's environment minister Buyelwa Sonjica and her two top climate change negotiators said Tuesday that part of the blame rested with the way the host guided the conference. In their first media briefing since returning from talks in the Danish capital that ended Saturday, the trio described an atmosphere of distrust and suspicion that Denmark was plotting to force its own position on other nations [AP]

. Europeans, too, balked at Copenhagen's conclusion. U.K. Climate Secretary Ed Milliband, in a Guardian editorial, also slammed the process, but pointed the finger at China in particular.

We did not get an agreement on 50% reductions in global emissions by 2050 or on 80% reductions by developed countries. Both were vetoed by China, despite the support of a coalition of developed and the vast majority of developing countries [The Guardian]

. European Union representatives reacted negatively to the loose agreement, both for not being part of the talks among the five nations and for the agreement's failure to set binding goals. The markets reacted too.

. Copenhagen did result in one actual ruling:

One hopeful sign is the accord's pragmatic agreement to pay countries to prevent deforestation. Reversing one of the Kyoto Protocol's failures, which perversely rewarded countries for planting trees but not for protecting them, this is precisely the kind of big picture cooperation between developed and developing economies that is needed to make a dent in global emissions [CNN]

. The U.S. pledged $100 billion to aid poor nations in reducing emissions, and China promised greater transparency in how it cuts carbon, but neither of those are binding. The parlor game this week is explaining why the Copenhagen talks went down in flames. Writing for CNN, Lisa Margonelli of the think tank New America Foundation says the meeting's scope was a disadvantage, not an advantage, as gathering the world together to craft rules that would be agreeable and effective was "scientifically and practically naive." The BBC blames 24 hour news, EU politics, and even the snowy weather for giving skeptics ammunition. (No, apparently we haven't gotten past the weather/climate issue. Just ask Homer Simpson.) The BBC hit it closest with their number one reason, however: "Key governments do not want a global deal." As long as that's the case, and major U.N. meeting occur in this format, no climate conference will produce anything but a document so wishy-washy that the effect on global emissions is negligible. Related Content: 80beats: Copenhagen Roundup: Protests, Walkouts, and the Money Wars 80beats: Day One: U.N. Climate Summit Begins in Copenhagen 80beats: Climatologist Steps Down as “ClimateGate” Furor Continues Discoblog: Another “Climate Trick” Controversy: Copenhagen Prostitutes Giving Freebies The Intersection: I’m Going to CopenhagenImage: White House / Pete Souza