: In a much-ignored speech last week (not ignored by Grist), Sen. Jeff Bingaman (D-N.M.) argued that the U.S. could become less vulnerable to spiking oil prices if we used less of it (surprise!). The crux of the talk was a graph he showed of our country's estimated petroleum imports, and specifically, the significant change inprojection between 2008 and 2011 (blue and red lines above). Our now-declining gas and oil imports are in part a result of the Energy Independence and Security Act of 2007. How the Heck: 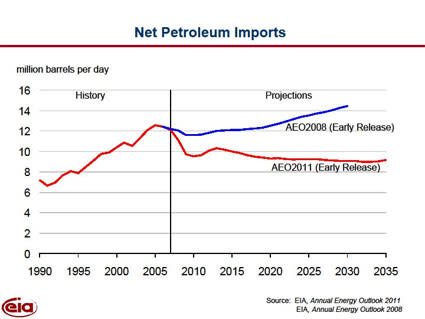 Not So Fast: Some green-tech writers think the EIA's predictions are more fiction than fact. According to Chris Nelder at Green Chip Stocks, the EIA's predictions often "present a picture of the future that looks like a continuation of the best parts of the past, with none of the bad parts." The assumption that our oil imports will keep on declining hinges partly on technologies that haven't been invented yet and the hope that all the policies included in the Energy Act come to fruition. The only thing you can't argue against is that petroleum demands right now are much lower than we had expected, thanks in due part to the Energy Act. What's more, the economy has largely sputtered since 2008, which tends to tamp down demand for energy. The graph might be more valuable if it showed oil consumption per unit of economic activity. Image: EIA