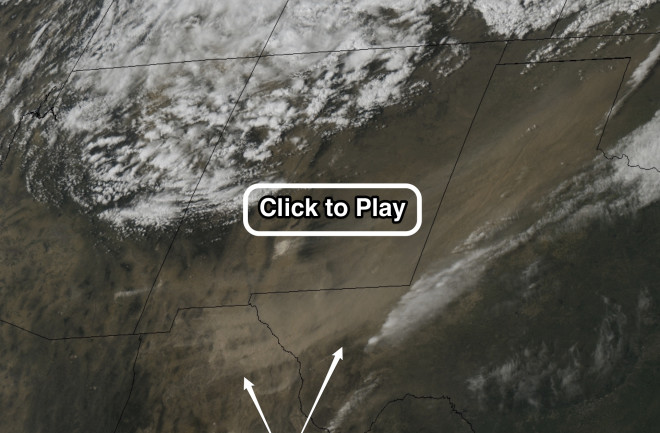 The GOES-16 weather satellite captured this view of large plumes of blowing dust originating from southeastern Arizona, New Mexico, Texas and Mexico on April 10, 2019. (Source: Cooperative Institute for Meteorological Satellite Studies) As the latest monster spring storm spun up over the U.S. Four Corners region on April 10, high winds drove huge amounts of dust all the way north to the Upper Midwest, where it fell as dirty snow. You can see the low-pressure center of the cyclone spinning counter-clockwise in the animation above of GOES-16 weather satellite images. Below it, watch for the gargantuan plumes of khaki-colored dust being swept up and driven to the northeast. Also check out the lighter, sand-colored patch (right under 'click to play'). This is White Sands National Monument in New Mexico, and the dust streaming from this area is lighter in color. The storm system, dubbed a "bomb cyclone" by meteorologists because of the rapidity with which it exploded in intensity, ultimately churned into the U.S. midsection with very high winds and heavy snow, creating whiteout conditions in Kansas and Nebraska. Major highways were closed, power to thousands of homes was knocked out, and hundreds of flights were cancelled. It was the second such storm this spring.

Another animation of GOES-16 satellite imagery reveals a subtle light-brown tinge to the clouds streaming over Iowa and Minnesota as the storm drove northwards. (Source: Cooperative Institute for Meteorological Satellite Studies) The animation above shows the dust being swept far to the north — all the way to Minnesota. Some of it fell as dirty snow. Check out these images posted to Twitter: https://twitter.com/1neatgirl/status/1116422825252990976 https://twitter.com/CaraiVei1/status/1116384937865822208