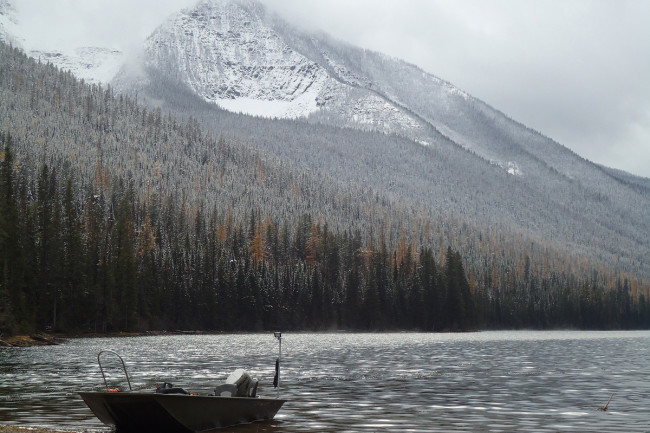 It’s spring, but frost covers nearly half the boat ferrying Clint Muhlfeld and his crew across Quartz Lake, high in the mountains of Montana’s Glacier National Park. They hiked 6 miles to meet the flat-bottomed skiff — which was strapped to the bottom of a helicopter and flown in — and carried nets, food, gear and gas because mules couldn’t cross the streams swollen with snowmelt. They’re here to tag an invasive species.

The arduous trip is one of many biologists have made to the park’s lakes in recent years, part of an ongoing search-and-destroy mission to rein in one of the most pernicious aquatic threats in the West: lake trout. The sport fish, introduced in lakes over the past 100 years, have outcompeted native bull trout in many of them. In Glacier, Muhlfeld is determined to put an end to this slow-moving catastrophe. Over the years, lake trout have invaded eight of the park’s 12 connected glacial lakes west of the Continental Divide.

“And that’s where we drew the line,” says Muhlfeld, an aquatic research ecologist with the U.S. Geological Survey and the University of Montana. “We have to stop this ecological catastrophe, or Glacier’s native fishes will be lost for future generations.”

Biologists have tried various ways to rid Western lakes of these invaders, such as electrocuting their eggs or encouraging anglers to take as many of the fish as they can catch. But on Quartz Lake, Muhlfeld and his team worked with the National Park Service to deploy a weapon they believe will greatly improve the bull trout’s odds: the Judas fish.

The crews create these Judas fish by scooping up adult lake trout, cutting them open and inserting tracking devices. Then they sew the live fish shut and release them back into the lake.

In autumn, the crews spend weeks clustered around the woodstove in a cabin on Quartz Lake, heading out at night on the nearly frozen lake, listening through headphones for the ping of sonic telemetry to track the Judas fish.

It’s a 900-acre lake, yet over a two-week period around Halloween, all the adult lake trout gather at night at the fish equivalent of a giant singles bar, at the base of an avalanche chute where cobble and boulders provide safe havens for them to spawn.

The Judas fish, living up to its biblical namesake, betrays the exact position.

That’s when the biologists drop the nets and pull them in, hand-over-hand to the slaughter.

Never mind that it’s backcountry-dark out and raining or sleeting or snowing, and headlamps provide the only light as the 25-foot boat bounces over white caps. They’re determined to get rid of the lake trout, or at least keep the population low enough that the native bull trout have a chance to thrive.

The Glacier watershed hosts about one-third of the natural lake habitat for bull trout in the country, but the fish themselves are increasingly scarce. Not only must they contend with lake trout, which consume native fish and compete with them for nutrients, now rising temperatures could soon make the water too warm for the cold-loving bull trout to spawn. Counts are so low that they’re listed as threatened under the Endangered Species Act.

The Judas fish has been a blessing for the bull trout of Quartz Lake. Over the five years of the project — the intensive phase wrapped up in 2014 — the team hauled more than 2,000 lake trout out of Quartz, finding fewer each year.

The native bull trout population is exploding, with more nests and some of the highest spawning counts on record.

“We got there in the nick of time,” Muhlfeld says.

But the battle isn’t over. In many other areas, lake trout are still winning.

The team has now set its sights on Logging Lake, in another area of the park. It poses an even bigger challenge than Quartz: Here, lake trout have already taken over, and there are few bull trout left. The Judas fish alone won’t be enough.

So Muhlfeld and his team are orchestrating a major intervention. In collaboration with park management, they’ve moved bull trout from Logging Lake to Grace Lake, which hasn’t been invaded yet. It lies above a 40-foot waterfall that lake trout can’t jump.

The team had to move the fish by hand, hiking into the backcountry with a low-voltage wand to stun the fish. Then they scooped them up and loaded them into a backpack filled with about 35 pounds of oxygenated water and hiked 2 ½ miles uphill to Grace Lake.

Fully aware that introducing fish to new environments is part of what started this cascade of problems in the first place, graduate student Benjamin Galloway spent two years evaluating the site. He found that the only fish species in the Grace Lake system are non-native, hybridized trout with no conservation value, so that isn’t a concern. And even if the introduced bull trout move back downstream, they will only land back in Logging Lake. 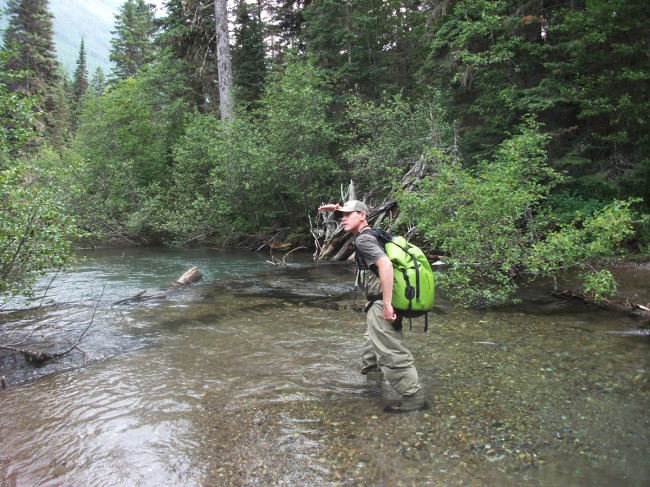 Given a fresh start in the safe waters of Grace Lake, the relocated bull trout will likely thrive. “They’re iconic. They’re at the top of the food chain,” Muhlfeld says. “They’ve survived in the park for thousands of years.”

Projects at Yellowstone Lake in Yellowstone National Park and at Idaho’s Priest Lake and Lake Pend Oreille are focused on removing lake trout in the hope that native fish will repopulate. But the Glacier team is going one step further. “We’re trying to also start a population where one didn’t exist, to hedge our bets over our success or failure in controlling lake trout in downstream waters,” says Chris Downs, the supervisory fisheries biologist and fisheries program manager in Glacier National Park. The risks seem minimal, and the alternative is to watch bull trout disappear from the ecosystem, he says.

And so Muhlfeld’s team hiked, up and down between the lakes, carrying backpacks full of fish. In 2014, they relocated 125 bull trout from Logging Lake to Grace Lake. Then they took out their new boat, this one customized with a winch to pull in the mile of net, and harvested as many of the remaining lake trout as they could from Logging Lake. They took measurements, checked the females for eggs, then “bonked them over the head, cut their air bladder and sunk them to the bottom of the lake,” Muhlfeld says, both to return the nutrients to the system and to keep from attracting grizzlies. In the spring, they returned for the juveniles. 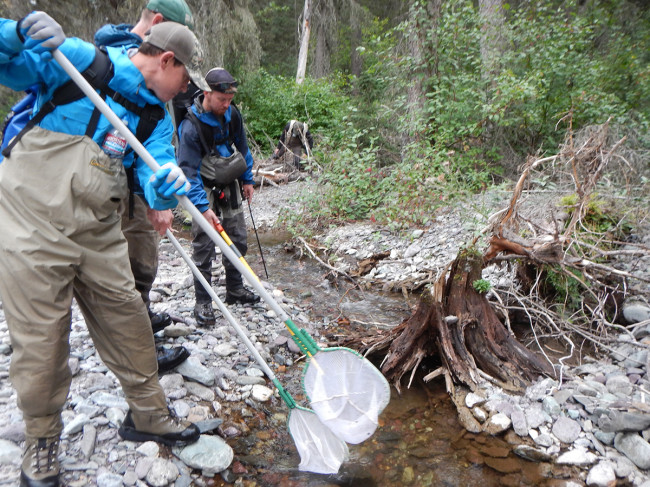 “The idea is that we overharvest the population from both ends, trying to turn off the faucet of reproduction and clean up the fish that sneak through or who have been there prior to suppression,” Muhlfeld says. “The hope is that doing both will cause the non-native population to collapse more quickly.”

They don’t know yet how many of the bull trout they’ve moved have survived. They have an antenna at the Grace Lake outlet, so if any tagged fish leave, they’ll know.

The hope is that the bull trout will thrive in Grace Lake and the fish will eventually return to Logging Lake.

“It’s a grand experiment,” Muhlfeld says. “But had we done nothing to put them in a safe haven, there wouldn’t be any fish left for us to conserve.”

This article originally appeared in print as "The Judas Fish."