The heat goes on, and on: This year will likely wind up as one of the three warmest on record 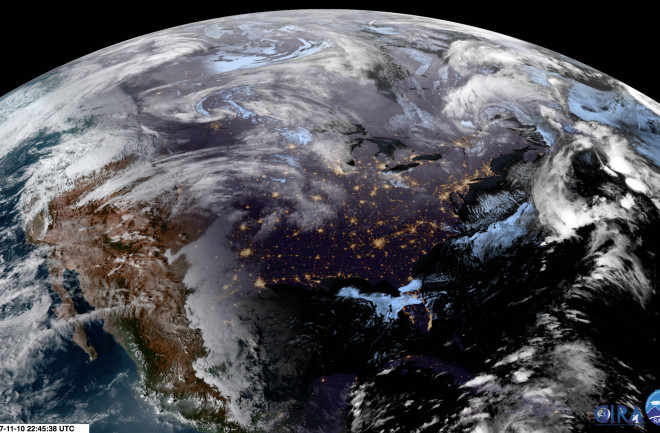 North America, as seen by the GOES-16 weather satellite on Nov. 10, 2017. The sun had already set on about three quarters of the continent. (Source: CIRA/RAMMB/Colorado State University) With a month and a half to go until year's end, it's looking like 2017 will go down in the books as the warmest on record – that is, among years that received no temperature boost from El Niño. Overall, 2017 is likely to be either the second or third warmest in records dating back to the 1800's, according to a new report from the World Meteorological Organization. Thanks to a boost from one of the strongest El Niño's of all time, 2016 will almost certainly retain the record of warmest year, at least for now. And we'll just have to wait to see whether the current year will beat out 2015 — which also got a boost from El Niño — as second warmest. From WMO Secretary-General Petteri Taalas, quoted in a release:

The past three years have all been in the top three years in terms of temperature records. This is part of a long term warming trend. We have witnessed extraordinary weather, including temperatures topping 50 degrees Celsius in Asia, record-breaking hurricanes in rapid succession in the Caribbean and Atlantic reaching as far as Ireland, devastating monsoon flooding affecting many millions of people and a relentless drought in East Africa. Many of these events – and detailed scientific studies will determine exactly how many – bear the tell-tale sign of climate change caused by increased greenhouse gas concentrations from human activities.

Back in April, there were some signs that a new El Niño was brewing. Had it happened, this year might well have surpassed 2016 as warmest year. But the El Niño never materialized. Even so, through September, the WMO reports that the average global temperature was approximately 1.1°C above the pre-industrial era.

Global average temperature temperature anomalies year-by-year, with El Niño and La Niña years indicated. (Graph: World Meteorological Organization) Now, a La Niña has actually taken hold. Characterized by cooler than average surface waters in the equatorial Pacific, La Niña tends to temper global temperatures a bit. (As I wrote in this post: She’s back! As a giant blob of cold water arises from the depths, La Niña takes over the equatorial Pacific.) Even so, the long-term warming of the planet caused by our emissions of heat-trapping carbon dioxide into the atmosphere will blunt's La Niña's cooling influence. And sooner or later, it will sends temperatures climbing above 2016's high mark – all without the influence of El Niño. It is only a matter of time.