When it comes to spent nuclear fuel, no solution is perfect—but the U.S's dry casks are pretty tough.

The dry cask was introduced in the 1980s as a temporary solution to the nuclear industry’s growing waste problem. Today it remains the nation’s best and only longish-term storage option. (The casks are designed to last 100 years.) There are about 1,300 dry casks at 55 sites nationwide; however, most of the radioactive waste generated in the United States sits in cooling pools similar to Japan’s. If the pool leaks or the cooling system breaks, as happened in Japan, the nuclear fuel rods could become exposed and release radioactive gas. 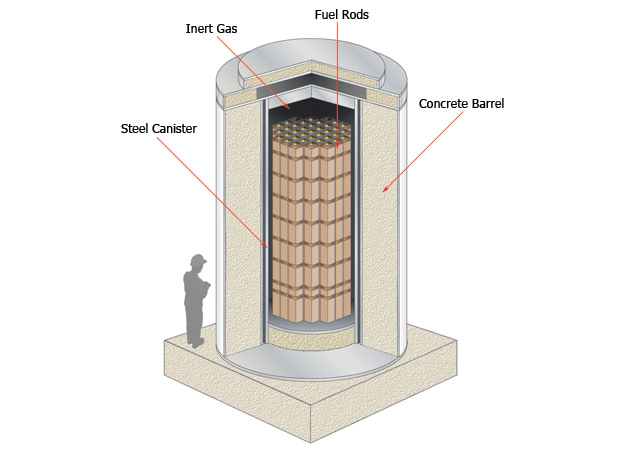 Dry casks offer a safer alternative, but transferring the waste into the casks is tricky work. After the fuel rods cool off in pools for five years, workers use a robotic arm to place them in 10-inch-thick steel canisters. These are vacuum-sealed to remove air and water, filled with an inert gas such as helium to prevent corrosion, and welded shut. For good measure, each canister is then placed inside a three-foot-thick concrete barrel with small vents to keep its contents cool.

The heavy-duty engineering also doubles as a security feature. “We’ve commissioned studies looking at the possibility of airplanes’ knocking casks over like bowling pins,” says Nuclear Regulatory Commission spokesman David McIntyre. While the details are classified, he reports that the drums held up very well.