The Great Geoengineering Publishing Smackdown of 2010

As discussed on the latest episode of Point of Inquiry (stream, download), Eli Kintisch's Hack the Planet isn't the only book just out on this subject. There is also How to Cool the Planet by Jeff Goodell, author of Big Coal and a writer for Rolling Stone.

This in and of itself is a phenomenon--the two books were clearly racing each other and ended up coming out at about the same time. The question is, is that timing right?

I have no doubt we are going to have a big public debate about geoengineering at some point in the future. At that time, one or both of these books could be considered essential reading.

However, thus far, neither seems to be having its big publishing breakout moment. Indeed, neither has any reviews yet on Amazon.

I myself can't speak to the books' comparative quality: I was only sent, and have only read, Kintisch's, and it's excellent. For all I know, Goodell's is equally worthy. If you're interested, I recommend that you buy both of them.

But you are not the general public. And as we've learned, 97 percent of Americans have no clue what geoengineering even is. They all ought to be reading these books, but the subject has not been put on their radar yet. So that is a challenge for both authors. 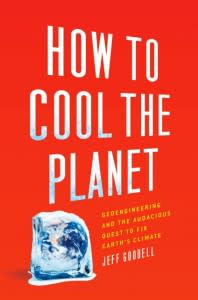 Another thing that I discussed with Kintisch on the latest episode of Point of Inquiry (stream, download),was the idiocy of certain rightwing embraces of geoengineering, by folks who don't even seem to believe in climate change. In particular, we discussed the SuperFreakonomics authors, who essentially embarrassed themselves on this subject, and misrepresented a leading climate and geoengineering scientist (Ken Caldeira)--but sold lots and lots of books.

In my view, it would be really tragic if Kintisch's and Goodell's books fail to receive a wide readership, so that instead, the reading public gets its ideas about geoengineering from the Superfreaks.

So, to that end, once again....I can't urge you enough....buy the new geoengineering books. Buy both of them!