The Good and Bad News About the Amazon River's Hidden Reef 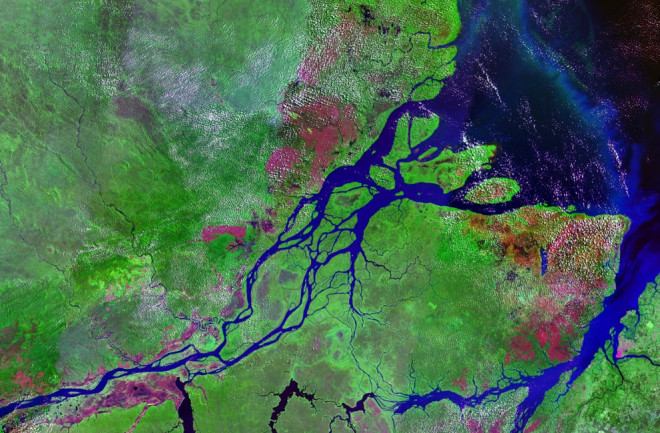 The mouth of the Amazon River. (Credit: Wikimedia) A hidden coral reef roughly the size of Delaware was discovered at the mouth of the Amazon River. It was a pleasant surprise for scientists, but the reef is already facing threats. The reef occupies about 3,600 square miles off the shore of northern Brazil and French Guiana, and is hidden under sediment that spills from the Amazon into the Atlantic Ocean. The find came as a surprise to researchers, who say that the combination of mud and fresh water dumped into the ocean by the Amazon should create near-inhospitable conditions for the fragile coral. By studying samples dredged up from reef, some of which likely represent new species, the researchers hope to learn how corals survive adverse conditions. In all, researchers found 73 species of fish, 61 species of sponge and many other aquatic denizens unique to coral reefs. The researchers published their findings last week in the journal Science.

Gone Before We Know It

The outlook for corals worldwide is bleak. The National Oceanic and Atmospheric Administration recently warned that we are in the midst of the third major coral bleaching event on record, which is in part caused by warming temperatures and increased ocean acidity. In addition, the region of the ocean were this reef is located contains another hidden resource: oil. There have been some 80 exploratory drilling permits acquired near the mouth of the Amazon River, and 20 of them have started producing, according to NPR. We may have found this reef just in time to watch it slip away. The researchers do say that this reef could offer some hope for the world's corals. The reef, on the whole, seems to be healthy — though some places are showing signs of distress — despite living in an unwelcome environment. The researchers took samples from the reef to bring back to the lab for further analysis, and they hope to discover the secrets to their impressive survival.