The Glitter Among the Gunk 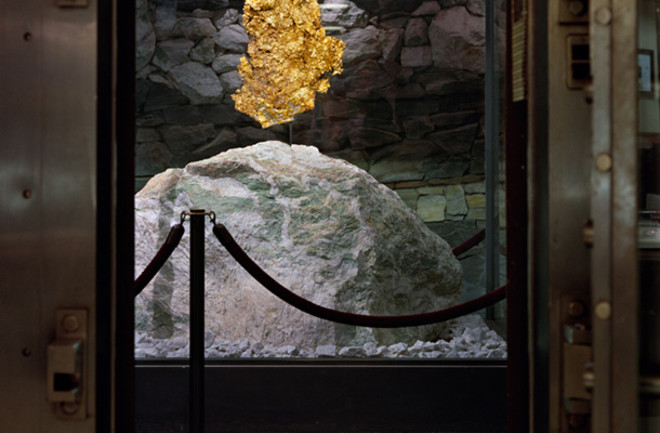 Recent gold prices at over $1,000.00 per ounce have fueled a modern gold rush that has sent hundreds to the hills and mountains of California to try their luck. This is not just a story of plucky individualists living on the edge, it is also a story of land use rights and the environment. The miners use lower-impact methods of panning and sluicing, but they are also using suction dredging in the quest for gold. Suction dredging sucks the river bottom up and through a sluice to isolate gold flakes; then the sediment is sent back into the river. Environmentalists point out that this is harmful to aquatic habitat and can stir up mercury pollution from historical mining. And the extraction is intensive: 10 or more such dredges can be found in a single mile of river. California passed a law in 2009 banning suction dredging to limit this practice. New York based Photographer Sarina Finkelstein started her project Prospectors about modern-day gold miners in California last year. She recently returned to California to continue the project, documenting the impact of this recent legislation on the mining community. The centerpiece of Ironstone's Heritage Museum in Murphys, California, is the largest crystalline gold leaf specimen in the world. Weighing forty-four pounds, this specimen of gold was discovered by the Sonora Mining Company on Christmas Day, in 1992, fifteen miles from its current home at Ironstone. Crystalline gold is one of the most rare and precious natural gold formations. Crystalline gold leaf consists of gold that has been deposited in layers between quartz, clay, maraposite, decomposed shale and pyrite. Sixty-three pounds before preparation, it spent almost a year in an acid bath washing away most of the surrounding matrix to ultimately reveal the forty-four pound specimen. The “Gold Pocket,” as it has come to be known, is 98 percent pure, making it a specimen of especially high quality and value. Courtesy Sarina Finkelstein