Have you ever wondered why some people are fearful of GMOs? Even if you shake your head at this question, it is important to ponder because most discussions of genetically modified crops are shaped more by emotions than facts. This is why the evidence-driven search for truth by Nathanael Johnson was not appreciated by anti-GMO food activists. So what's driving GMO fears? For one thing, the science of agricultural biotechnology is still fairly new and poorly understood. As the journal Nature explained in a 2013 editorial:

Fears of the unfamiliar and ‘unnatural’, and concerns about health or environmental impacts, have frequently prevented approval and adoption of the crops, especially in Europe, where protesters have destroyed experiments.

To really grasp what's behind this, you have to understand the underlying psychological reasons that lead people to be scared of GMOs. David Ropeik provides a great explainer in the current issue of Cosmos, as Australian science magazine. His piece is part of a package of articles that explores various controversial issues surrounding GMOs and more generally, agriculture. I'll be discussing many of these pieces in this space over the next several weeks. (Disclosure: I'm a senior editor at Cosmos.) The stakes for agriculture, the environment and food security are considerable. There are unfortunate consequences to biotech opposition, as Cosmos editor-in-chief Elizabeth Finkel notes in her feature:

Paradoxically, activists are attacking precisely those technologies that are helping to reduce chemical use and lifting poor farmers out of poverty.

But it's not just activists who are opposed to GMOs. As former Guardian reporter Leo Hickman wrote last year:

Polling indicates that, despite a small drop in recent years, opposition to GM food in the UK – and to a greater extent across the rest of Europe - is significant and rigid.

It's important to understand why this is. Hickman next provided a succinct explanation:

There are many reasons for this – a complicated cocktail of emotion, psychology, politics, ideology and science – but the blunt reality for advocates of GM crops is that they still face a steep incline before them.

In my piece for the special Cosmos edition on agriculture, I examine the part of the stew that concerns politics and ideology, specifically the Monsanto factor. I write:

Once greens and anti-biotech activists settled on Monsanto as a target-rich enemy, they realized quickly how useful the company (and its history) would be as the poster child for biotechnology.

To learn more about how Monsanto put itself in this position, read the 2002 book, Lords of the Harvest: Biotech, Big Money, and the Future of Food, by NPR's Dan Charles. To learn more about the humanitarian implications of anti-GMO activism, read the 2008 book, Starved for Science: How Biotechnology is Being Kept out of Africa, by Robert Paarlberg. Meanwhile, if you want to learn how Monsanto thinks it can recast its public image--and the general perception of GMOs, read my piece. Additional reading: My main Cosmos piece includes a sidebar called, "Seeds of Deception." In my feature, I reference an odd exchange between Janice Person, social media director for Monsanto, and a person sitting next to her on a plane. Here is Person's description of the encounter at her blog. This 2000 New Yorker piece on Monsanto, by Michael Specter. "Why the Climate Corporation Sold itself to Monsanto," a 2013 New Yorkerpost by Michael Specter. An example of Monsanto Derangement Syndrome: 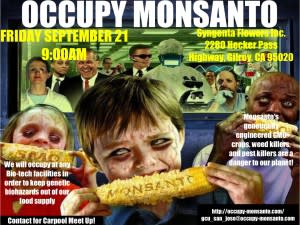