Regular readers of Collide-a-Scape know that I'm interested in popular narratives that shape public discourse. I'm specifically interested in how science and environment-related topics are covered in the media, and how this coverage tends to create dominant narratives. Along these lines, I've explored the genesis and amplification of varied media narratives, from Jared Diamond's collapse meme and Paul Brodeur's power lines/cancer connection reportage to Vandana Shiva's GMO/Indian farmer suicide storyline. One interesting pattern, as these cases suggest, is that sometimes the emergence and staying power of a particular narrative owes to an influential science writer, well-placed journalist, or popular activist. In other cases, a narrative coalesces around a stock villain, such as Monsanto as the great Satan, or a phrase like the "new normal," a term that associates severe weather events with man-made climate change. I like to explore how these memes originate and what sustains them. I have the feeling that not everybody shares this interest. So when another journalist researches the archives for a story on how agricultural biotechnology became so controversial, it's worth noting. Here's the opening scene Brooke Borel sets for her piece recently published at Modern Farmer:

In the spring of 1987 in Tulelake, a tiny California farming town four miles from the Oregon border, a small band of scientists wearing yellow Tyvek suits and respirators paced across a field spraying potato plants from handheld dispensers. Representatives from the Environmental Protection Agency perched on ladders above and checked air monitors to make sure the contents of the dispensers weren’t spreading beyond the field’s boundaries. Dressed in billowy white safety jumpers and peaked caps, the EPA agents looked like apocalyptic bakers. Nearby, journalists eagerly took notes and snapped photos of this eerie scene, which would become national news — this was the world’s first field experiment of a controversial new technology: genetically modified organisms.

The organism in the Tulelake test was a modified version of the bacterium Pseudomonas syringae, or ice-minus. In its natural state, P. syringae is a common pathogen to many plants. In the mid-seventies a doctoral student at the University of Wisconsin named Steven Lindow discovered that the bacteria caused plants to freeze at higher temperatures than normal. A few years later, Lindow moved to the University of California, Berkeley, and he and his new team began to peer inside the bacteria for the gene that promoted frost in plants – something that cost farmers $1.5 billion a year in crop damage. They found and deleted that gene, creating modified bacteria that didn’t encourage frost. If the modified bacteria were released in a field, the reasoning went, they might outcompete native bacteria and keep crops from freezing in a cold snap. By 1982, the scientists were busy planning field tests to see if their genetically engineered bacteria could help crops fight frost.

I recommend you read the rest of the story to learn how the response to this field research by environmentalists set the tone for how GMOs would be perceived and discussed in the media over the next two decades. But before you do that, let's revisit a chapter from Dorothy Nelkin's classic 1987 book (1995 updated edition), Selling Science: How the Press Covers Science and Technology. 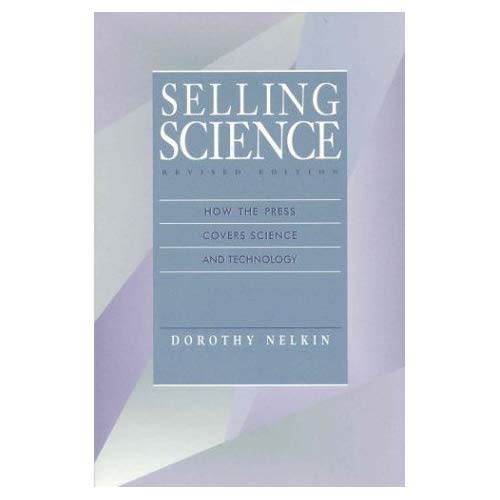 She discusses the initial coverage of GMOs in the late 1980s and early 1990s:

Biotechnology applications have inspired futuristic risk reporting--speculations about the possible harm of bioengineered products yet to appear. One of the earliest disputes over biotechnology applications focused on the field testing of Ice Minus, genetically altered microbes intended to inhibit water crystallization and protect strawberries from frost injury. Environmental groups, concerned about health hazards, opposed these tests. Newspaper coverage highlighted the activities of Jeremy Rifkin, who has been a persistent critic of biotechnology since the recombinant DNA controversy in Cambridge, Massachusetts, in 1976. News reports on the Ice Minus field tests included striking and provocative photographs of the workers who were spraying the fields, wearing protective clothing that resembled the moon suits associated with the cleanup of toxic chemicals and nuclear wastes. Opposition to the bioengineered Flavr Savr tomato gained substantial media attention--as much it seemed, on account of its irresistible potential for puns as for real evidence of risk. The genetically engineered tomato, introduced by the biotechnology firm Calgene in late 1991, was initially welcomed in the press as a fruit that would not rot on the way to the market. The product generated media stories on the "wonders" of high-tech foods--leaner meat, celery sticks without strings, crisper and sweeter vegetables--and the press supported Calgene's effort to classify its product as a food rather than a drug that would be subject to FDA regulations. But then, as critics of biotechnology moved in, skepticism became fashionable, and journalists began to write about the tomato as a "frankenfood," a "killer tomato." There was a "tomato war" and a "tomatogate." The idea of injecting mouse genes into food, the spectacle of chefs boycotting a tomato, the concern about "safe soup," attracted reporters who covered this product as an example of the risks that were bound to emerge from biotechnology.

Nelkin goes on to note that the images pervading media coverage of biotechnology became "remarkably similar to those that had been projected during the nuclear power controversy--the synthetic monsters, the mutant animals, the mad scientists, and an industry out of control." It is hard to undo a narrative once it becomes entrenched.