The Dragon Eats the Sun

As china's economy steams ahead at full throttle, environmentalists worry about an impending ecological nightmare in East Asia. The same engines that drove Western industrialization, such as dirty coal-fired plants and the burning of forests, now pump sulfur and soot into China's darkening skies. But the results from a new study offer a surprise incentive to stifle the smog: Atmospheric haze is shrinking China's crop production. 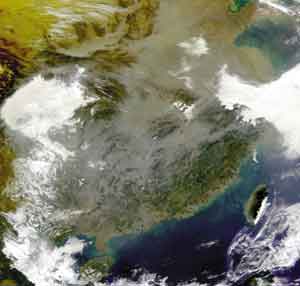 Satellite and ground-based images show that particles of suspended pollutants absorb and scatter sunlight over more than two thirds of eastern China, preventing the sun's rays from reaching farmland. Every 1 percent of dimming reduces crop growth by an equal 1 percent, says atmospheric chemist William Chameides of Georgia Tech, who led a joint China-U.S. team to study the problem. Chameides reports that heavy hazes reduce China's rice and winter wheat crops by 5 to 30 percent in the most vital agricultural regions of the nation--and he thinks he may be understating the loss: "Over the next three decades, China is going to need to increase crop production by about 30 percent to meet growing demands. One way of doing that is simply by mitigating some of the air pollution."