The Device That Will Keep Your Mini-Laptop From Melting

As computers get smaller, keeping them cool has become a major problem—until now. 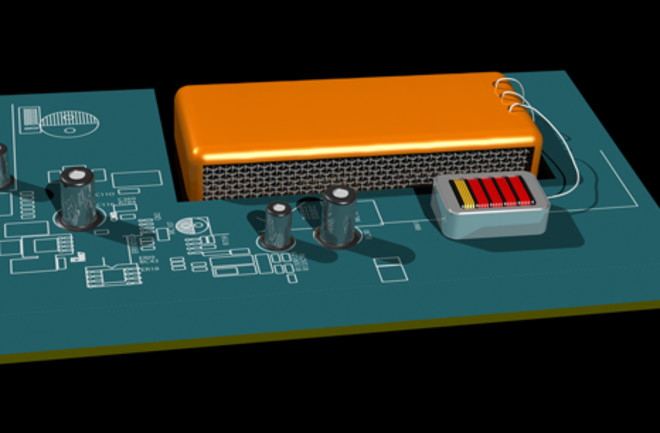 Thin is in, whether you’re talking TVs, cell phones, or laptops. In fact, thin electronics are downright hot, literally. The trend in electronics toward miniaturization squeezes more chips into ever smaller devices, leading to intense heat buildup. Toasty notebook PCs create more problems than just scorched thighs. Excessive heat can cause slowdowns and lockups in demanding applications like videos and games. Over the long term, overheating shortens the life of processors and chip sets in notebooks and other downsized electronics. So the race is on to create more compact and efficient ways to cool off sensitive components.

Most PCs today use fans and heat sinks to dissipate the warmth. But as laptops get thinner, fans have downsized too, becoming less efficient in the process. To tackle this problem, Tessera, a mini­ature technologies provider based in San Jose, California, is working on a solid-state alternative that tests have shown can remove the same amount of heat from a laptop as a conventional fan—but do so more quietly and using half the power.

Tessera’s Silent Air Cooling Technology (ACT) is based on electrohydrodynamics, which uses charged ions rather than a mechanical device to create airflow. Ionic flow applications have been around for years; copiers use them, but they are probably best known for use in air purification products. Tessera, building on early research out of the University of Washington, is taking electro­hydrodynamics for thermal management of electronics to the next level.

Tessera still has to prove it has solved issues of dust contamination and reliability before Silent ACT can go to volume production and become a viable alternative to fan-based systems. Dust is a major cause of failure in fan coolers, and company engineers are studying its impact in the ionic environment. Craig Mitchell, senior vice president of interconnect, components, and materials at Tessera, cannot yet put a price tag on the new technology, promising only that “we will be in the ballpark that we need to be in.”

Laptops and the emerging netbook market are phase one for Silent ACT, but Tessera is looking at other categories of electronics that call for more efficient and quiet thermal management. Noisy game players, video projectors, digital video recorders, and media servers are ready and waiting.

Tessera’s Silent Air Cooling Technology uses charged air molecules to create an airstream that removes heat without any moving parts. The system employs an electrohydrodynamic blower that draws power from the PC. In the device, voltage is applied to a positively charged electrode, creating a high-intensity electric field that ionizes surrounding air molecules. Because opposite charges attract, the positive ions move toward the negative electrode, colliding with neutral air molecules en route. In the process, charge and momentum transfer to those molecules, which are swept along. The displaced warm air is dispersed through fins, eliminating the need for a fan.