The Deepest, Darkest Place on Earth Is Eerily Noisy 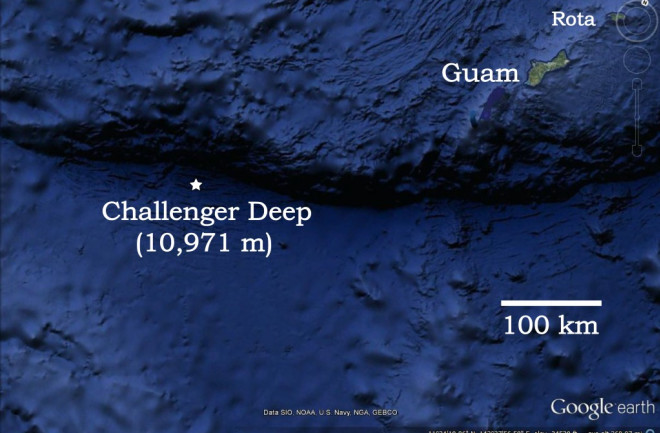 If you’re looking for some peace and quiet, you certainly won’t find it at the bottom of the ocean.

Scientists from the NOAA have released audio recordings taken from the Mariana Trench, the deepest part of the ocean. Even here, sounds from humans, animals and even the earth itself eerily echo in the dark.

Researchers sunk a specialized probe, called a hydrophone, almost 36,000 feet into the Challenger Deep at the Mariana Trench in an effort to establish a baseline for oceanic noise. They were expecting to capture nothing more than a vast, echoing silence, given the extreme remoteness of their testing site. Instead, over the course of 23 days, they were able to capture whale calls, ship propellers, earthquakes, and even the sound of a Category 4 typhoon passing by overhead. In the recording below, you can hear a baleen whale calling, followed by a magnitude 5 earthquake that occurred July 16, 2015.

Sound Goes On and On

Sound waves travel around five times faster through water than through the air, and have to deal with fewer disturbances and obstacles. For this reason, sounds underwater can travel much further than sounds up above. Whales are known to communicate over long distances using low-pitched grunts and moans, and they could likely be heard up to 1,000 miles away before the days of ship traffic and noise pollution in the oceans.

The prevalence of noise pollution today is one of the main reasons the NOAA scientists are conducting the study. The increasing din of human activity in the ocean, caused by ship propellers and sonar, has been linked to disruptions in whale and other marine wildlife behavior. The researchers want to establish a baseline of sound in the ocean today in order to measure changes in the future. At the bottom of the Mariana Trench, researchers set up their hydrophone as far away from any disturbances as possible.

The researchers had to create a special probe capable of withstanding the crushing pressure seven miles below the surface. They then had to lower the titanium-covered ceramic probe with extreme caution, at a sedate 16 feet per second, to allow it to acclimatize to the harsh conditions.

The researchers plan to return in 2017 to make more measurements and see if noise levels have increased.