The Cretaceous on Fire 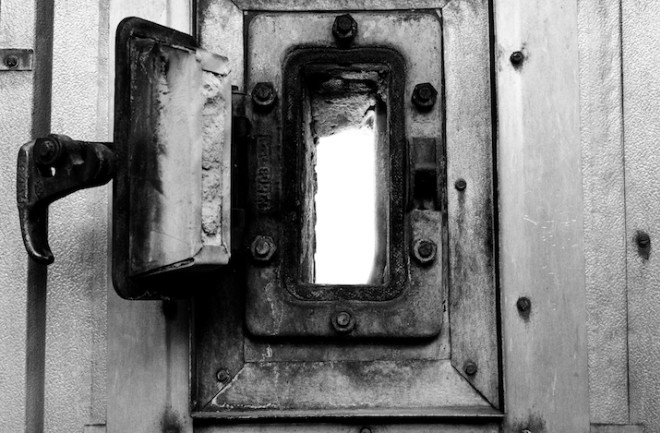 A coal fire burning at 2,000 degrees F is visible through a small porthole in the furnace of the Valmont Power Station in Boulder, Colorado. (Image: © Tom Yulsman) In Stephen King's epic post-apocalyptic novel "The Stand," a small band of survivors from a flu pandemic that has killed 99 percent of the world's population gather in Boulder, Colorado and gradually try to reconstitute a civil society. As part of the effort, one of their tasks is to get a coal-fired power plant running again. They succeed. And eventually the story reaches an explosive denouement involving the forces of evil hunkered down in — where else? — Vegas. When I moved to Boulder in the mid-1990s, I was shocked to learn just how large the Valmont Station actually was compared to what I pictured in my mind's eye based on King's novel. And since then I've been yearning to see what it was actually like inside. Last week, I got a chance to take a tour with two of my cameras. The photo above is from that visit, taken with a Mamiya C220 medium format camera on Tri-X film. You're looking at a porthole, about 10 inches high, into the furnace itself, where coal dust is injected and ignited, creating a fire so hot that if you get within a few inches of the porthole, your hair might catch fire. The word "gargantuan" is not much of an exaggeration in describing the furnace, which is probably about 10 stories high.

Part of an abandoned smokestack at Boulder's Valmont Station, constructed of meticulously laid brickwork. (Photo: © Tom Yulsman) In the cyclones of fire that swirl in more than 7,000 coal-fired furnaces around the world, including the Valmont Station, humanity is burning traces of the Cretaceous Period — an activity that may not take us all the way back to the hothouse climate of that long-gone era, but certainly a good part of the way there. One thousand eight hundred tons of Colorado coal is fed into the Valmont Station's fires every day — enough to fill 18 railroad coal cars. That coal formed primarily from vegetation that grew in fresh-water swamps adjacent to a large seaway that cut North America in two during the Cretaceous, which lasted from 145.5 to 65.5 million years ago. At that time, higher levels of carbon dioxide in the atmosphere helped sustain a considerably warmer climate that enabled palm trees to grow in northern Canada, and breadfruit trees, a tropical species, to thrive above the Arctic Circle. In 2008, Valmont Station, a relatively small power plant, emitted almost 1.4 million tons of carbon dioxide into the atmosphere. When I visited last week, I expected that sobering statistic to temper any feelings of fascination about the technology. But what actually happened caught me be surprise.

The generator hall of the Valmont Power Station in Boulder, Colorado. (Shot in color on a digital camera and converted to black and white to match the other photographs. Image: © Tom Yulsman) Construction of Valmont Station began in 1921, and whoever designed the building had more than a utilitarian factory in mind. The brickwork is exquisite, and the main generator hall, several stories high, is daylit with soaring cathedral-style windows. This had to be deliberate — an effort to create a cathedral to modernity. And I have to admit that as I walked through the hall I felt awestruck. There are five generators in Valmont's great hall, but only one still produces electricity. The others have been retired.

One of the Valmont power plant's retired generators. (Image: © Tom Yulsman) Even so, the still operating generator, installed in 1964, churns out 186 megawatts of power. That's roughly enough to serve 186,000 Colorado homes. It can run on coal, but also natural gas. (Another three turbines at the station are powered by natural gas.) I originally posted the image at the top of this piece to Facebook, and when my long-time friend and colleague Andrew Revkin saw it, he had this to say on his Tublr site, quoting a book he wrote in 1992 about global warming:

In his 1954 essay “Man the Firemaker,” Loren Eiseley correlates human progress with the use of ever-more-potent fuels...As Eiseley put it, “Man’s long adventure with knowledge has, to a very marked degree, been a climb up the heat ladder…. Today the flames grow hotter in the furnaces…. The creature that crept furred through the glitter of blue glacial nights lives surrounded by the hiss of steam, the roar of engines, and the bubbling of vats…. And he is himself a flame — a great, roaring, wasteful furnace devouring irreplaceable substances of the earth.”

Valmont's hunger will finally be satiated in a few years. Xcel Energy reached an agreement with the State of Colorado to shut down the coal-burning unit at the station by 2017 in a broad effort to reduce air pollution along the highly urbanized Front Range — the developed region at the foot of the Rockies. I have been writing about climate change since 1984, and I am convinced it confronts humanity with an epochal challenge. And so you might imagine how strange it feels to say this: There's a part of me that's going to miss the Valmont Station.