The Cartoonish March Against Monsanto

Because the crazy train on genetically modified foods has already left the station, I'm puzzled by the headline of a recent post:

Biotechnology Industry Organization: It's not too late to change the conversation on GMOs

That's the equivalent of the IPCC saying, "It's not too late to change the conversation on climate change." If you want to know the state of the GMO discourse, look at the event that has just attracted worldwide attention. As AP reports:

Organizers say two million people marched in protest against seed giant Monsanto in hundreds of rallies across the U.S. and in over 50 other countries on Saturday. "March Against Monsanto" protesters say they wanted to call attention to the dangers posed by genetically modified food and the food giants that produce it. Founder and organizer Tami Canal said protests were held in 436 cities in 52 countries...The group plans to harness the success of the event to continue its anti-GMO cause. "We will continue until Monsanto complies with consumer demand. They are poisoning our children, poisoning our planet," she said. "If we don't act, who's going to?"

No, the only thing that's truly being poisoned is the biotech debate by such rhetoric. I'm also willing to bet that organizers are being as truthful about the number of marchers as they are about the science on genetically modified foods. (Kinda interesting that the Guardian headline for the AP story states the estimated protesters as fact, when it's just a claim by the march organizers.) Nonetheless, there does seem to be many people who buy the notion that dangerous GMOs are being foisted on the world by Monsanto. I suspect this owes to influentials like Vandana Shiva, the globe-trotting environmental activist who is held in high esteem by foodies and greens. In a video filmed several days ahead of the GMO protest, Shiva characterized Monsanto's corporate power and its patenting of seeds as "a new form of fascism" and a "new form of dictatorship." She elaborated:

When Hitler came to power and the Nazis came to power, with their kind of genocide, people created resistance movements everywhere. Today, this new fascism is over life itself, in all its diversity. It's not just controlling one religion, one race. It's wanting to outlaw all diversity of all life on earth...This march against Monsanto is a call to end the dictatorship over seed, over life, over our food, and over our freedom.

I could write a few choice words about Shiva's Nazi and genocide analogy, but I'll let it speak for itself. (She made another offensive equivalence a few months ago.) You can listen to the whole thing here, if you'd like.

Meanwhile, at Monsanto's evil incorporated headquarters, I'm thinking there is somebody who looks like this. 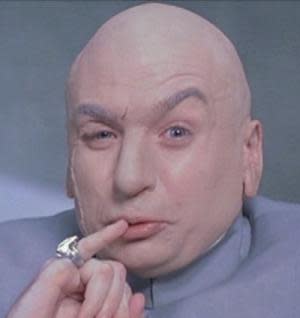 Rachael Ludwick says it best (and be sure to read her excellent post):