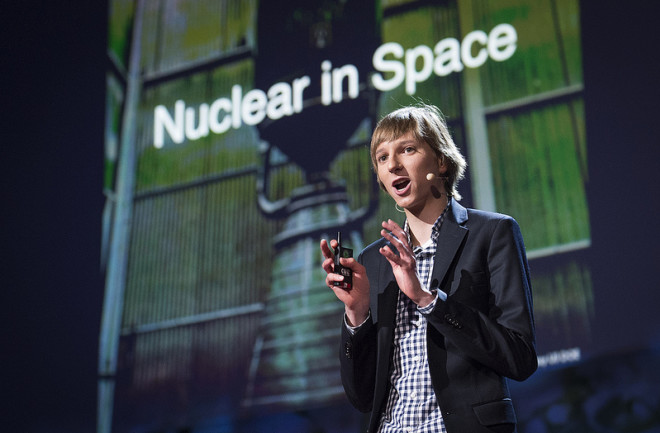 Taylor Wilson, nuclear scientist, at TED2013. Spend a few minutes chatting with Taylor Wilson and three things will happen: You will feel old. You will feel dumb. You will feel like you’ve squandered your life. Wilson, who first garnered fame as the kid who built a nuclear reactor in his Reno garage, told the crowd gathered to hear him Wednesday at TED2013 that he’s left his first love, fusion, for a fling. “I’m really into fission now,” declared Wilson, still in his teens. “Is fission played out or is there something left to innovate there?” Wilson’s fission flirtation has led him to develop a compact molten salt reactor that he says needs refueling only once every 30 years, and “loves to eat downblended uranium.” Because much of the reactor is buried and its uranium is not weapons-grade, Wilson added, it’s less vulnerable either to terrorist attack or misuse. While his talk on Wednesday’s main stage in Long Beach was as polished as entrepreneurs three times his age, it was when I sat down with Wilson later in the day that I found myself thinking: I just hope he uses his powers for good. Wilson is composed and confident but without a whiff of cockiness. Even his asides are more earnest than arrogant—“I don’t patent because my competitors, like Elon’s, are national governments,” he told me, casually referencing SpaceX and Tesla Motors founder Elon Musk, who spoke earlier in the day. Aside from the promise of cheap and sustainable energy on his home planet, Wilson sees potential in his compact reactor for rocket propulsion, and even to power colonies on Mars and beyond.

Jack Andraka, inventor, at TED2013. Wilson was not the only whippersnapper onstage at TED on Wednesday. Maryland teen Jack Andraka turned grief—and an obsession with nanotubes—into a promising new test for pancreatic cancer. Andraka was barely into his teens when he got interested in nanotubes, cylindrical carbon molecules that he bought off the Internet and used as the basis for developing a cheap, easy, low-tech method to test for the protein mesothelin, which is present in significant quantities in people with pancreatic cancer. Andraka was inspired after a family friend died of the disease; the teen was shocked to learn that pancreatic cancer is typically detected late-stage, but, when found early, responds much better to treatment. The Wednesday TED crowd gave Andraka a standing ovation for his invention, though he hasn’t published his findings yet and says real-world use is still 2-5 years away. Not that the 15-year-old is resting on his laurels. He’s already working on a number of other medical devices that, he believes, will eventually allow cheap, fast and accurate detection “of any disease you might have.” Speaking with me after delivering his talk, Andraka grinned mischieviously and said “I’d tell you more, but my patent lawyer would kill me.” Vancouver teens Jeanny Yao and Miranda Wang, also speaking at Ted on Wednesday, said a lab accident in 2011 led them to discover that a common bacteria degraded phthalates—the plastic additives linked to birth defects, cancers and other woes, and released into our environment at a rate of 470 million pounds per year. Although both women are now in their first year of university, they continue to investigate the bacteria, as well as candidates to degrade other plastic components, and believe the answer to safe and effective plastic degradation will be found in their lifetimes.

Stewart Brand, environmentalist and futurist, at TED2013. Not every speaker on Wednesday’s stage at TED 2013 was under 20. Whole Earth Catalog founder and babyboomer icon Stewart Brand, for example, is no spring chicken—he just wants to “doctor” them. Brand is on a new crusade to “de-extinct” species wiped out by humans over the last 10,000 years, from the passenger pigeon to the thylacine, or Tasmanian Tiger. “Humans have made a huge hole in nature over the last 10,000 years,” Brand said. “We have a moral obligation to repair some of the damage.” For a variety of extinct birds, for example, Brand proposes taking DNA from museum samples, hybridizing when necessary with the animal’s nearest living relative and using “slightly doctored chickens” to bring the embryos to term. If you’re thinking “haven’t I seen this before?” Brand acknowledges there may be some unexpected consequences of reintroducing extinct species, including the risk they might wipe out animals that evolved to fill the empty niches their extinction left behind. “The results won’t be perfect, but nature isn’t perfect, either,” Brand said.

Another elder of the science community, biologist Allan Savory, proposed an idea just as controversial during his early evening Wednesday talk. Savory called human population growth, climate change and desertification “the perfect storm” now threatening our planet, adding that he estimates two-thirds of Earth’s land is undergoing desertification. Why? Because, contends Savory, humans have wiped out the once-massive herds of grazing wildlife that evolved in a balanced co-existence with non-human predators. These herds once trampled the vegetation, leaving their dung and urine behind, providing the soil with nutrients in a natural cycle. In their absence, the ground is left, in a manner of speaking, to die. “The one option left is to do the unthinkable,” said Savory. “Use livestock to mimic nature. There is no alternative.”

At any tech-savvy and forward-thinking conference featuring SpaceX and Tesla founder Elon Musk, you’d expect the uber-entrepreneur to be the headline act. There was a subdued quality to Musk’s time on stage, however. Instead of giving a talk, Musk answered questions from session host Chris Anderson, and did not address the recent kerfuffle over a negative New York Times review of Tesla’s Model S. Musk promoted another of his projects, Solar City, contending that solar energy would be—and had to be, from a sustainability perspective—the planet’s dominant form of energy within the next 20 years. He also claimed space exploration was a necessity, in part “to avoid an eventual mass extinction event” here on Earth, but added it won’t be possible until we figure out how to make reusable rockets that can take off again shortly after landing. He’s working on making one of those, too, of course.

Sergey Brin demos Google Glass at TED2013. Another much-hyped appearance was Google co-founder Sergey Brin modeling Google Glass, the wearable and wired device that Brin promised to be less “emasculating” than smartphones. Sounds are conducted via your skull, an experience Brin described as a little “freaky” at first. The idea behind the device, which looks like something you’d see on Tony Stark, is to put all the capabilities, and more, of your average smartphone in a location that will allow you to interact more normally with your immediate environment, including the people around you. No more looking down to text or check email. Now, apparently, you can stare slightly above the horizon as you Facebook about what you had for breakfast, and you won’t be able to tell if the guy in the lane next to you is attentive to traffic or reading his girlfriend’s texts. Brin mentioned the gadget’s camera made it easy for him to record casual moments with his family that he might not otherwise have captured; I couldn’t help but wonder whether he might have enjoyed those moments more if he’d experienced them fully as they happened, without the Google Glass strapped to his head. Speaking early in the afternoon, MIT’s Andrew McAfee had one of the best one-liners of the day. Promising that the “New Machine Age” was something to be embraced, not feared, McAfee quipped: “I’ll worry about robots becoming aware and taking over when my computer becomes aware of my printer.”

For sheer charisma, however, “renegade gardener” Ron Finley took the prize. Finley is promoting gardening in inner city “food deserts,” including in public spaces, a practice that has gotten him into trouble in his South Los Angeles neighborhood. But Finley believes his “food forests” will not only improve diet and nutrition—“more people die from drive-throughs than drive-bys,” he said—but also instill pride and a spirit of community. Finley said he wanted his neighborhood’s young men in particular to put down their guns and pick up shovels. “We need to change attitudes,” he declared. “We need to say, if you ain’t gardenin’, you ain’t gangsta.” Earlier in the day, Alastair Parvin represented a team of designers, builders and craftsmen developing open source building guides at Wikihouse that he believes will one day allow the average person, with minimal skills and tools, using local materials, to construct his own home.

Michael Green, architect, at TED2013. Canadian Michael Green is tackling the issue of affordable, sustainable housing from a different angle: using one of the most traditional building materials in history in a new way. “Wood is the most technologically advanced material I can build with. It just so happens that Mother Nature holds the patent,” said Green during his Wednesday talk. Green is designing wooden skyscrapers 30 stories tall, and believes that’s not even the upper limit for the material. During a chat after his talk, he admitted the reservation he hears most often about his preferred material is fear of increased deforestation. Pointing to thriving and well-managed forests in Germany and Poland, Green argued that the solution is to selectively harvest mature trees with fast growth cycles, creating not only a sustainable supply of building materials but also healthier forests. “I have children,” Green said. “I want to do the right thing. I want to do the right thing for them, and for the planet.” The annual TED conference, which turned 29 this year, features speakers from multiple disciplines delivering brief talks (four to 18 minutes long) on innovations and ideas in the areas of technology, entertainment and design. Presenters and audience members have a broad and international range of experiences, and include renowned scientists, visionaries, celebrities, artists, venture capitalists and corporate leaders.