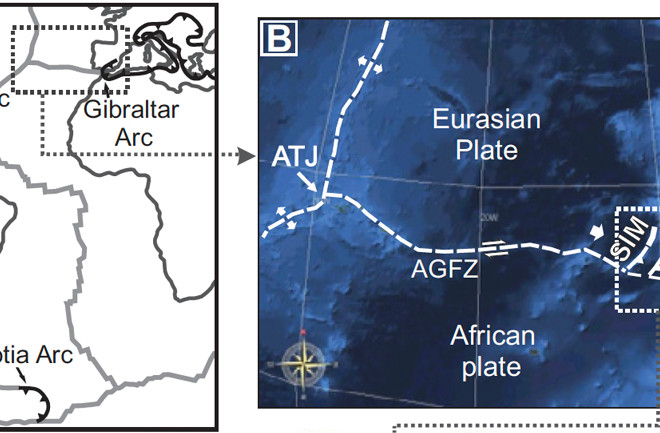 A simplified tectonic map of Atlantic Ocean (A) and the location of the study area (B). Image courtesy of João Duarte via Geology. Hundreds of millions of years ago, a single mega-continent on the Earth broke up and began to drift apart. The pieces spread out across the surface of the globe, eventually settling in their current positions as continents and creating oceans in between. Now scientists have observed the first indication that this movement may be shifting into reverse, setting the United States and Europe on an eventual collision course. Such an expansion and contraction of the Earth's crust is directed by a recurring process called the Wilson cycle. Step one: tectonic plates move apart, breaking up supercontinents and filling oceans. (Picture Pangea.) Step two: tectonic plates fracture, creating new subduction zones that force one plate under the other, into the Earth's molten mantle. Step three: subduction brings the continents back together to create a new supercontinent. Using seismic data to map the ocean floor off the coast of Portugal, geologists found the first signs of a fracture occurring at what's called the southwest Iberia margin, located in the middle of the Eurasian plate (see the map above). The tectonic activity is very minor at this point, but the researchers think it may lead to the creation of a new subduction zone. If this is indeed the case, it could split the tectonic plate in two, creating an oceanic plate that would be drawn under the continental plate that contains Europe. Over the course of millions of years, this could ultimately reunite North American and Europe. This inkling of movement under the Atlantic Ocean, which lead researcher João Duarte calls an "embryonic subduction zone," is the first evidence that this plate may be starting the re-closing process. The results, published in Geology, will help flesh out details in geological models about the ebb and flow of Earth's crust and the oceans between. However, present-day humans don't have much to worry about. The Wilson cycle is thought to have occurred in its entirety only three times in the history of our planet, and it will be another 220 million years or so before North America crashes into Europe. So don't start planning your transatlantic roadtrip just yet.