When it comes to evolution, no reputable museum would dare "teach the controversy," a catchphrase used as a ploy by creationists some years back, when they tried to put "intelligent design" on an equal scientific footing with evolutionary biology. The biotech issue, which is a source of much controversy in environmental and food circles, is a separate beast. But exactly what aspects of biotech constitute legitimate scientific debate is also a contentious matter. It would be nice if we could sort that one out. Unfortunately, the public GMO discourse is dominated by phony, pseudoscientific claims advanced by ideologically motivated activists and their enablers in the media. Like climate change, the crazy politics of the GMO debate trump the science. Along those lines, I view the "right to know" campaign (which is part of a larger effort to label genetically modified foods) as a variation of the creationist "teach the controversy" strategy. Both the "right to know" (and "just label it") and "teach the science" movements have something in common: They deny and muddy established, consensus science. Partisanclimate skeptics that are ideologically motivated play the same game. So museums, which help educate the public on evolution and climate change, play an integral communication role on the issue of genetically modified crops. With that in mind, I was curious to learn how the subject would be treated in a new exhibit at the American Museum of Natural History called, Our Global Kitchen: Food, Nature, Culture. I went to see it yesterday with my wife, the foodie in our family. I learned something very important almost as soon as we got there: Don't show up hungry to a cocktail reception. We went to a special viewing of the exhibit last night that was preceded by an assortment of delicious finger foods brought out by roving servers. After about 15 minutes, I noticed that some of the servers hoisted their platters over their heads as they walked brusquely past me (and other famished patrons). I got the hint and we moved on to the show. Those who are interested in global agriculture/sustainability issues will like it. A number of pertinent questions are raised, as the exhibit's overview states:

Our population is expanding, while standards of living are also changing and our environment is increasingly strained. How will future food production meet the growing demand? Will our diets have to change? Can technology provide the answers? New trends in biotechnology, health science, processing, and cooking technologies, as well as issues like climate change, will all affect what we eat.

Overall, I thought the curators handled these issues in an informative, mostly fair manner. That's no easy feat, for as the New York Timesobserved in its review:

there is a larger theme running through the show, about how cultures transform nature, and how, in recent years, those transformations may have gone awry.

Industrial farming is pegged as a major culprit. What the exhibit didn't address adequately, to my satisfaction, was how the world's immense agricultural footprint can be lessened while still meeting the food needs of a global population expected to reach nine billion people by 2050. I figured biotechnology would be discussed, and it was, but only superficially. It seems as if the curators went out of their way to speak only broadly (and minimally) to the topic. In a video, one speaker gave a nod to its importance while another cautioned about potentially unknown consequences. That approach is reflected in the two panels that directly addressed the subject, which I snapped pictures of. This panel obliquely suggests that biotechnology will play a positive agricultural role--if done right. 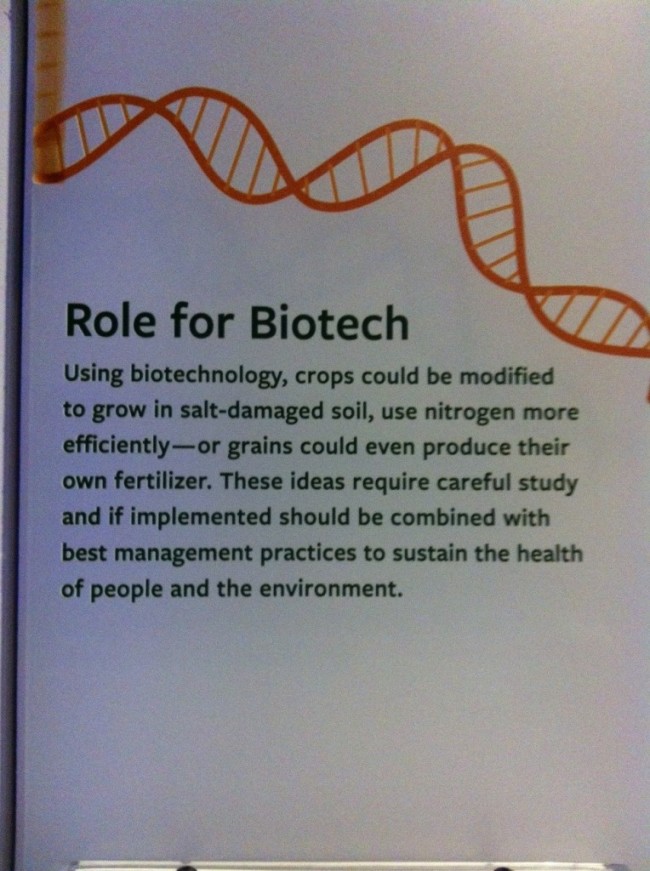 The next one casts doubt on the value of genetically modified crops and suggests there is much to still be worried about. It appears to give undue weight to the kinds of trumped up controversies that GMO opponents are known to traffic in, including the attribution of a commonly recurring agricultural problem to a particular technology. 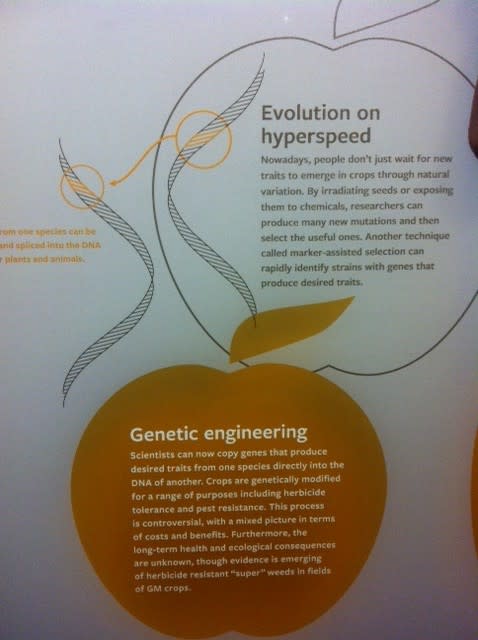 As I indicated above, the issue of herbicide resistance is not unique to GMO crops. It is unfortunate that this otherwise excellent exhibit highlights such a conflation. That got me wondering where the curators might have turned to for facts on biotechnology. The exhibit's website offers a one-stop shop for supplementary information pertaining to the subjects it covers. If you click on it and scroll down, there's a section called "genetic engineering and agriculture." The first link is to the Union of Concerned Scientists (UCS) and this:

At least one major environmental impact of genetic engineering has already reached critical proportions: overuse of herbicide-tolerant GE crops has spurred an increase in herbicide use and an epidemic of herbicide-resistant "superweeds," which will lead to even more herbicide use.

Bingo. Would you like spin-free information on "superweeds" and the risks associated with biotechnology? If so, turn to Anastasia Bodnar and Karl Haro von Mogel, who write at the essential Biofortified blog:

Whenever a pesticide is used year after year in the same place on the same target populations, resistance to that pesticide will develop. This is not a problem specific to genetic engineering. With any pesticide, and with any genetically engineered crop that involves pests, the pesticides must be rotated to prevent any resistance genes that develop from spreading throughout the population. While crops resistant to glyphosate have resulted in a switch away from other herbicides to glyphosate which has resulted in an increase in glyphosate resistant weeds, this is not due to genetic engineering. The problem is a lack of integrated pest management strategies that incorporate a variety of solutions.

Is the American Museum of Natural History helping the public learn about biotechnology in its fine new exhibit on food and agriculture, or is it just teaching the controversy?