Tale of Two Seals: Winners and Losers in a Warming Arctic 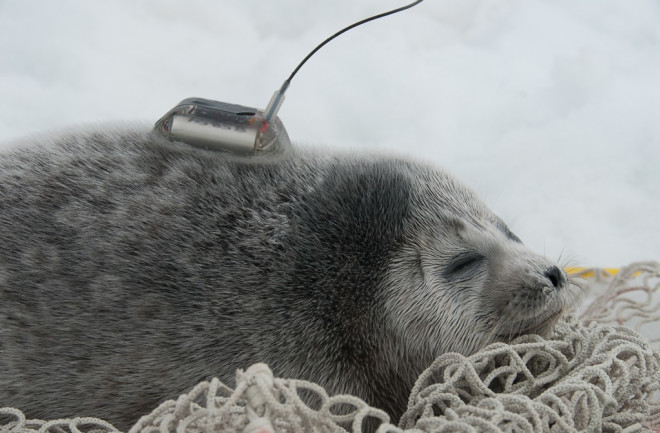 A ringed seal pup outfitted with a satellite-linked transmitter just prior to being released as part of a project to understand the species' habitat ranges throughout the year. (Photograph: Michael Cameron/NOAA)

Editor's note: With the Arctic warming faster than any other region on Earth, floating sea ice in the region has been in decline: The average area of Arctic sea ice shrank at a rate of 57,000 square kilometers each year between 1996 and last year. That's an area slightly larger than the state of Michigan.

For the animals and other living things that manage to scrape a living in the harsh Arctic environment, you might think that this would be welcome new. And you'd be right — for some species, but most definitely not for others. As scientists learn more about the impacts of human-caused warming in the far north, they are gaining a clearer picture of both the winners and losers. This guest post examines two examples: ringed and harbor seals. It's by Gloria Dickie, a master's student in the environmental journalism program I run at the University of Colorado.

This is her second post reported from the Arctic Frontiers science conference in Tromsø, Norway. (You can find her first one here.)

Not all seals are created equal, especially when it comes to impacts from climate change and energy development in the Arctic.

Consider the ringed seal. These blubbery blobs are heavily ice-dependent. They’re the only seal species in the Arctic to forge breathing holes in the ice with their claws (through as much as 7 feet of ice!). They also rely on a floating slabs of sea ice as stable platforms for both resting and reproduction.

a researcher at the Norwegian Polar Institute and University of Tromsø, puts it:

So if sea ice continues to shrink, so too could the population of ringed seals. And that would affect other species, most especially the polar bear, for whom the ringed seal is not just a tasty snack but often the primary source of food.

Hamilton studies ringed seals’ relationship with ice and snow in the waters off Svalbard, an Arctic archipelago north of the Norwegian mainland. By fixing the animals with satellite-relay data loggers, Hamilton has been able to monitor their activity.

As part of this study, she and her colleagues were able to compare how the animals fared during two periods: 2002-2003 and 2010-2012. During the earlier period, sea ice conditions were more or less "normal." But starting in 2006, "the sea-ice situation in Svalbard changed dramatically, and the new reduced-ice situation has prevailed in the years since," according to Hamilton.

Summer sea-ice extent has shifted from a position over the continental shelf around Svalbard to a new northward position over the deep Arctic Ocean Basin. Moreover, the amount of ice that forms in the fjords in western Spitsbergen has decreased significantly.

These changes seem to have triggered a sharp increase in "foraging costs" for ringed seals between 2010 and 2012. For example, the seals have been traveling much further north into the deep Arctic in search of sea ice. In fact, one individual in particular embarked on a northward journey that ultimately totaled a staggering 5,000 kilometers — equivalent to a transatlantic journey between New York City and Ireland.

The seals are not only having to travel more to find sea ice. They are also spending more time diving for food and less time resting on ice, refusing to haul out to take a break until they’re satiated.

Unless ringed seals can compensate for this increased activity by gaining more energy from their diet, they could turn out to be one of the losers in a warming Arctic. And as a keystone species, their decline would have widespread effects. As Hamilton and her colleagues put it:

Ringed seals are a central component of the arctic food web and changes in their abundance will reverberate through the arctic ecosystem.

A harbor seal at the Polaria aquarium in Tromsø, Norway. (Photo: ©Gloria Dickie)

Svalbard is also home to the northernmost population of the harbor seal, which boasts an impressive latitudinal and longitudinal range.

Here, harbor seals are genetically isolated from mainland populations and protected from the human exploitation that has weakened some colonies elsewhere. More importantly, harbor seals do not require sea ice to complete their life cycle.

Marie-Anne Blanchet, a researcher with the Norwegian Polar Institute, has been mapping the activity budgets of harbor seals in and around a small group of islands off the west coast of Spitsbergen in Svalbard.

She found that unlike ringed seals, which can travel thousands of kilometers, harbour seals prefer to stay within 50 kilometers (31 miles) of the western coastline, and traveled no more than 228 kilometers (141 miles) from their initial tagging site, seemingly constrained by the continental shelf break. Furthermore, the seals seldom entered the regions’ deep fjord systems.

Blanchet also discovered some surprising information on the seals’ relationship with ice. Despite their independence from sea ice, she found harbor seals can still tolerate relatively high ice concentrations and make use of ice floes for resting. But they also move around much more when there is a lot of sea ice, since unlike the ringed seal, harbour seals can’t make use of breathing holes. If they don’t want to be trapped, they need to keep moving.