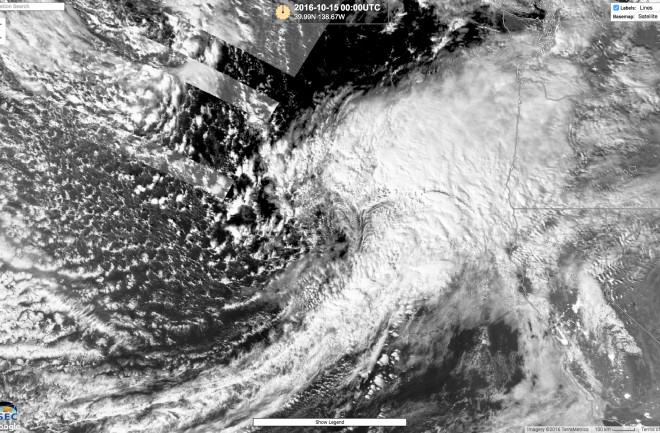 The Ides of October Storm, as seen under moonlight in the early morning hours of Saturday, Oct. 15, 2016 by the Suomi NPP satellite. (Source: RealEarth/SSEC) As I'm writing this on the afternoon of Saturday, October 15th, the powerful Ides of October Storm is bearing down on the Pacific Northwest, threatening strong winds, high seas, major storm surges, and coastal flooding, starting soon and continuing into the nighttime hours. The image above, captured by the VIIRS instrument on the Suomi NPP satellite, shows the storm as it was plowing toward Oregon and Washington in the wee hours of Saturday morning. Seen in reflected moonlight, the clouds stand out in beautiful high contrast. SEE ALSO: The ‘Ides of October Storm’ is gathering strength and charging toward the Pacific Northwest The latest forecast is for the center of the tempest to make landfall around Cape Flattery in Washington. Atmospheric pressure at its center is expected to plunge to around 970 millibars — equivalent to that of a Category 2 hurricane.  Once the storm makes landfall, it won't be packing those kinds of winds. Even so, the forecast along Oregon's coast near the Washington border is for gusts as high as 80 miles per hour. Waves offshore could reach 30 feet. (To check on wave height forecasts at specific locations, check out the experimental Nearshore Wave Prediction System from the National Weather Service.) Bottom line: This is one ferocious storm. https://youtu.be/Hu-sQDgeP-M The animation above consists of infrared images from the GOES-West weather satellite. It shows the evolution of the Ides of October Storm between Oct. 14 and 15, 2016 as it was gathering strength and heading toward the Pacific Northwest. The final image in the animation was acquired at 2 p.m. PDT today (Saturday, Oct. 15) when the center of the storm was just off the coast. | Correction: An earlier version of this post stated that Cape Flattery is in Oregon. That was incorrect. It is in Washington. |