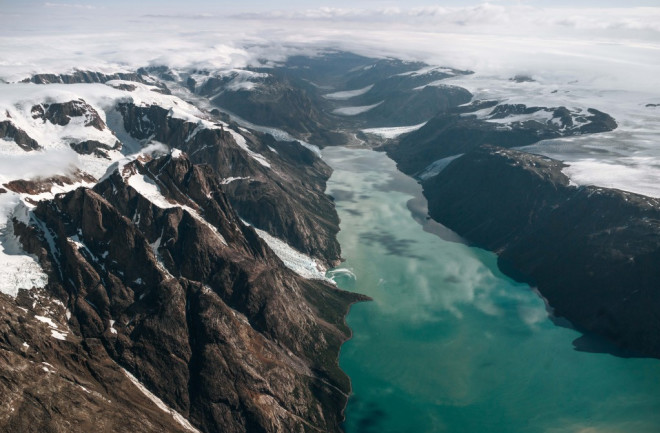 Acquired 1935 (Source: NASA Earth Observatory) I love NASA's Earth Observatory so much that I check in with it every day knowing I'll be rewarded with a visual treat about the Earth. But I'm a journalist, which means I have an urge to try to break news first. That includes beating the folks at EO to big, visual, Earth and environmental sciences stories (which I'm proud to say I've done from time to time). Today, though, I just have to share the Earth Observatory's imagery as is. It consists of the two photographs above of the Sukkertoppen ice cap in southwest Greenland, which is being affected by global warming. Both were shot from aircraft. Sometimes, a picture really is worth a thousand words — except in this case, it's two pictures. Take a minute to gaze at them... That beautiful fjord in the top image is filled by striking emerald waters, the color no doubt the result of glacial flour — silt-sized particles of rock resulting from grinding of the bedrock by glaciers. Those glaciers ultimately help funnel ice from the vast Greenland Ice Sheet to the sea. According to a new study published today in the Proceedings of the National Academy of Sciences, the sheet shed ice at a rate of about 243 billion tons a year between 2003 and 2009. That was enough to raise sea level 0.68 millimeters each year during the period. That's obviously not a whole lot, but year by year, decade by decade, it has been adding up — and building on sea level rise from glacial retreat around the world, as well as a warming and therefore expanding ocean. Since 1880, the world's oceans have come up by about 8 inches — one of the clearest impacts of global warming. That has been contributing to erosion of river deltas around the world, and higher, damaging storm surges. Just how much glaciers in Greenland's Sukkertoppen ice cap region have retreated can be seen by looking at the second photo above, taken in 1935. As today's Earth Observatory post puts it:

By summer 2013 (top), the glacier had retreated by about 3 kilometers (less than two miles) since summer 1935 (bottom), according to researcher Anders Bjørk of the Natural History Museum of Denmark. Both photographs were acquired from aircraft, most recently in an effort by Bjork and colleagues to re-photograph the sites of Greenland's fast-changing glaciers.

http://youtu.be/0S4T2Q8sBW8 What's going on in Greenland as a result of global warming is illustrated in this video released today by NASA's Goddard Space Flight Center. The visualization of ice loss is particularly revealing.