The Trump Administration claims the plan is intended to cut emissions.

This animated spiral portrays the simulated changes in the global average monthly air temperature from 1850 through the present relative to 1850-1900, and then where they are projected to head if we do nothing to reduce emissions of carbon dioxide. (Source: Jay Alder, USGS)

The Trump administration has rolled back Obama-era climate change rules in an effort to save coal-fired electric power plants in the United States.

Unfortunately, research shows that “clean energy” is the opposite of what this rule will produce.

A story today in the Washington Post summarizes the new plan this way:

Unlike the Obama administration’s 2015 Clean Power Plan, the new rule does not set specific greenhouse gas emissions cuts for each state. Instead, it allows state regulators to determine how utilities can improve efficiency and will not force companies to switch from coal to lower-carbon energy sources.

The Trump Administration claims the plan is intended to cut emissions 35 percent below 2005 levels by the end of the next decade. But research published last April in the journal Environmental Research Letters shows that over the long run, it is likely to lead to increased emissions.

According to the study’s authors, that’s the result of a “rebound phenomenon”: Thanks to the efficiency improvements anticipated by the ACE plan, coal plants will operate more frequently, and for longer periods of time. That, in turn, will lead to increased CO2 emissions by 2050 compared to what would happen if there were no rule in place at all.

Moreover, the researchers found that, compared to no policy, by 2030 the new rule will increase sulfur dioxide pollution from coal-fired power in 19 states, and nitrogen oxide pollution in 20 states plus the District of Columbia. This will have negative impacts on human health.

“The key takeaway is that ACE is a free pass for carbon emissions,” says Kathleen F. Lambert, a study co-author and Senior Advisor at Harvard’s Center for Climate, Health and the Global Environment. 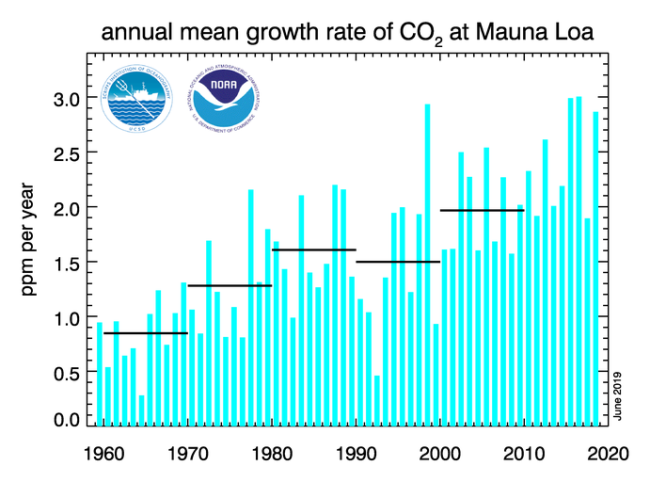 The trend of carbon dioxide concentration in the atmosphere as measured on Mauna Loa in Hawaii. The growth rate of CO2 has been accelerating. (Credit: NOAA/Scripps Institute of Oceanography)

Carbon dioxide concentrations have been increasing every year — and the rate of increase has been accelerating, as the graphic above shows.

The culprit: Increasing emissions of CO2.

Here’s a summary of the study investigating the likely impact of Trump’s ACE rule, as described in a Harvard release: