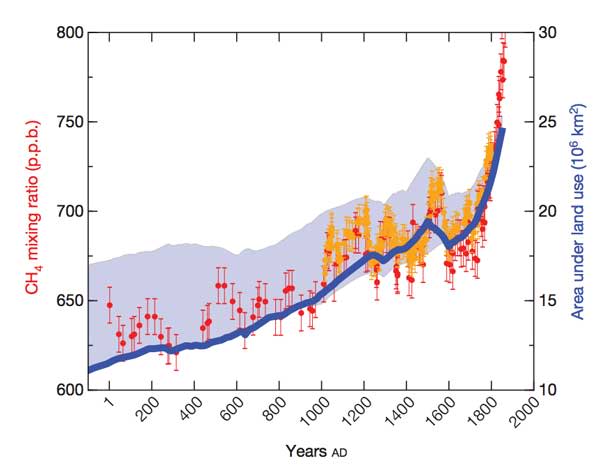 Ancient civilizations emitted greenhouse gasses, too; the red and orange dots above mark indirect measures of methane in the atmosphere over the past two millennia.

Scientists have thought that humans only started emitting significant quantities of greenhouse gasses in the 19th century, after the Industrial Revolution

---and the fossil fuels that powered it---took hold. But a study

in Nature today suggests that our history as heavy emitters stretches back much farther, to the charcoal fires of the Roman Empire and the intensive agriculture of Han China. To examine carbon emissions past, the research team analyzed more than 50 ice cores from Greenland, gauging levels of the greenhouse gas methane in Earth's atmosphere going back to 100 B.C. They looked at specific carbon signatures in the methane to determine whether it came from burning coal and other materials---meaning humans might have been involved

---or a natural biological process, then used mathematical models to further narrow down manmade emissions from naturally occurring ones. Human emissions, they found, were noticeable, though minuscule compared to post-industrial levels; only perhaps 10% human methane emissions over the past 2,000 years were produced before 1800

. For a time when there were far fewer people around, however, that's still a lot of methane to be sending off into the atmosphere. Emissions rose and fell with human population and activity, the researchers found. Before 200 A.D.---when Rome was on top of the world and the Han dynasty in China was clearing land and planting rice to feed its booming populace---methane emissions were high; just the charcoal used for smelting metal in Rome at its peak, the team estimated, produced 650 million metric tons of methane a year

. But as the Roman empire and Han rule began to crumble, population plummeted, as did the fires, deforestation, and other industrial activities that had accompanied it---and, the researchers found, methane emissions went down again. The next spike in emissions, from 800 to 1200 A.D., was during a time of population growth, and thus deforestation to make way for agriculture in Europe and Asia; the third was during the Little Ice Age

, likely due, the researchers suggest, to an increase in coal fires because of the colder temperatures and to yet more clearing of land. While our current technologies and our sheer numbers mean we're emitting greenhouse gasses at astonishing rates today, this study shows it's a far older pattern than scientists believed. And climate models, which often use pre-industrial levels as a baseline, may eventually have to be updated to reflect our long past as polluters.

EnvironmentAs the Arctic Continues its Meltdown, Economic Exploitation Quickens
Recommendations From Our Store