In recent years, people have become increasingly concerned about unwanted substances lurking in their furniture and food. These are industrial chemicals we are exposed to every day and that have been found to accumulate in our bodies, "endangering our health in ways we have yet to understand," CNN asserted in 2007. 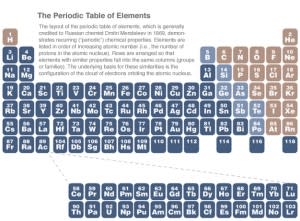 Periodic Table of Elements. Illustration courtesy Harvard. In 2010, a New York Timesarticle tried to make sense of the "avalanche of data" that has yet to yield any clear answers on what adverse effects (if any) these chemicals are having on our health. That hasn't prevented some in the media from highlighting (and omitting) information that confirms their worst suspicions. For example, here is Tom Philpott in Mother Jones, writing this week about a class of chemicals that have garnered the most attention:

Bisphenol A (BPA) and phthalates are what's known as "endocrine disruptors"—that is, at very small doses they interfere with our hormonal systems, giving rise to all manner of health trouble. In peer-reviewed research, BPA has been linked to asthma, anxiety,obesity, kidney and heart disease, and more. The rap sheet for phthalates, meanwhile, includes lower hormones in men, brain development problems, diabetes, asthma,

Philpott's summation on the state of chemicals-are-linked to-endocrine disrupter science is, to put it charitably, incomplete. For one thing, the links he points to are correlative associations, not cause and effect. Also, numerous researchers and scientific bodies have challenged the underlying basis for the litany of harms claimed to stem from exposure to chemicals in our food chain and household products. (Jon Entine laid this out nicely last year in Forbes.) Finally, there was an important session at last month's American Association for the Advancement of Science (AAAS) conference that I'm betting Philpott has heard about. Perhaps he even read the Guardianstory on the major analysis discussed at the panel. The results of that study found, as the Guardian reported, ''that levels of BPA in people were much lower than the levels required for significant effects." Now by no means am I cavalierly dismissing the concerns of public health scientists, many who have been studying this issue for years and who remain convinced that there is sufficient evidence to be wary of BPA, flame retardants, and other industrial chemicals used in everyday items. I'm also not dismissing the legitimate concerns of science-minded individuals or the likelihood of the chemical industry downplaying such concerns. But we need to acknowledge something: There is a real scientific divide on the debate over endocrine disrupters, which is illuminated in this recent report by Live Science. That divide, to the best of my knowledge, is not reflected in the overall news coverage or public discourse on health risks posed by residual chemicals that are absorbed into our bodies. On the contrary, what we mostly see is a form of chemophobia (reinforced by a constant stream of suggestive studies) that many in the news media subtly and overtly stoke. As science journalist Deborah Blum has written,

we need to do a much better job as journalists in communicating risk in general and chemical risk in particular.

UPDATE: For more on the AAAS panel and the BPA controversy, this is a must-read piece by Trevor Butterworth.