A new paper could shake up California’s earthquake predictions. 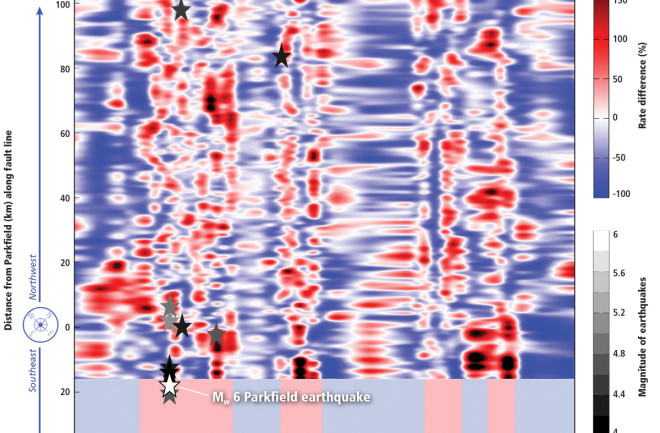 For more than a century, geologists have been interested in the San Andreas Fault Zone (SAFZ), the 800-mile-long system of faults in western California where the Pacific and North American tectonic plates meet. The plates grind against each other as they drift northwest at different speeds, the root of several major earthquakes in modern history. The most destructive of these quakes happened around the turn of the 20th century — and experts warn we’re overdue for another.

Until recently, geologists thought the SAFZ’s central sections, home to cities like San Jose and San Luis Obispo, moved at a steady creep, releasing energy in a way that would avoid major earthquakes. But a paper published in June in Nature Geoscience suggests otherwise.

It seems the plates have inched along in a series of so-called stick-slip movements. Over the years, these plodding stop-start shifts have caused a string of slow mini-quakes, most of them too minor for us to notice. However, they’ve also built up pressure between the plates along the SAFZ’s northern and southern sections, where metropolises like San Francisco and Los Angeles sit. Current models don’t account for these stick-slip movements, which means quake forecasts will need updating.

The image below shows stick-slip movements directly along the fault near Parkfield, California, a settlement in the SAFZ’s central area that experienced a magnitude 6 earthquake in 2004. Blue signals indicate periods of below normal movement and red above normal, with black being the most intense. This heightened activity doesn’t always lead to a quake, though. For instance, in mid-2006 and again in late 2008 going into 2009, the same area on the fault that triggered the Parkfield event saw other significant bursts of stick-slips without full-scale quakes.