Starfish-Killing Robot May Save the Great Barrier Reef 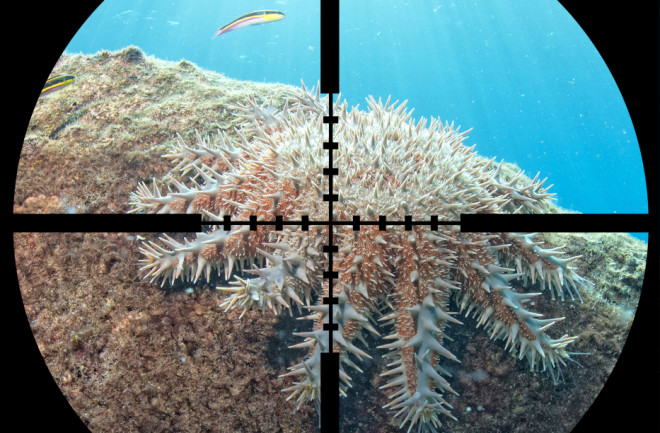 Scientists have designed a robot that kills with the mechanical efficiency you’d expect from a soulless hunk of metal, but there’s no reason to be concerned.

The COTSbot will soon be set loose to wreak havoc, but for a noble cause: to save the struggling Great Barrier Reef. You see, the reef is under siege by hordes of Crown of Thorns Starfish, prickly menaces that destroy coral, which serves as the foundation for the world’s most complex underwater ecosystem. COTSbot is coral’s new defender.

Five decades ago, scientists sounded the alarm about the destructive powers of these spiny starfish. They tend to attack reefs in waves, and there have been three such Crown of Thorns outbreaks since the 1960s. Right now, we’re in the midst of a fourth explosion of these creatures. According to scientists, the damage inflicted by starfish swarms on coral reefs is second only to cyclones.

To this point the job of controlling the starfish has fallen upon human divers, who kill starfish by injecting them with a solution of cattle bile. Hundreds of thousands of starfish have been killed in this manner. But the Great Barrier Reef is big, and there aren’t enough divers to wipe the stubborn starfish out.

COTSbot to the rescue. The robot doesn’t need a lunch break, it doesn’t have a family, and it doesn’t mind working for free. Two scientists from Queensland University of Technology designed an underwater drone that can pull an 8-hour shift and wipe out about 200 starfish in each shift. The robot uses a proboscis-like instrument with a retractable needle to pierce starfish and inject its toxic payload.

COTS is loaded with programs that help it distinguish starfish from innocent creatures. After the robot does its work, human divers will sweep in later to take care of any starfish that survived the wrath of the robot.

Scientist plan to send COTSbot on trial missions later this month, and they plan to work on refining the bot’s navigation systems during these test runs. Eventually, a fleet of 10 to 100 COTSbots will be put into action on the reef.

With any luck, the days of the Crown of Thorns starfish may be numbered.