Starfish Are Dying Out Fast Along America's Pacific Coast 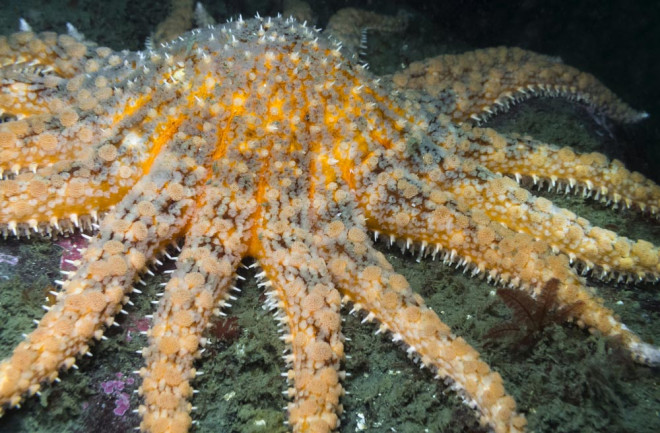 The sunflower sea star has abruptly died out across much of its native West Coast range. (Credit: NatureDiver/shutterstock)

Sea stars, also commonly called starfish, are among the most abundant animals along the U.S. West Coast. But now scientists say an epidemic spurred by warming ocean waters is decimating sunflower sea stars, a critical predator in kelp forests. The sea stars’ collapse could wipe out the shallow water ecosystems that provide a home for seals, sea otters and commercially important fish.

“The epidemic was catastrophic and widespread,” said Drew Harvell, a marine ecologist at Cornell University in Ithaca, New York, who led the new research. “Infectious disease is causing endangerment in not just sea stars but also corals and abalone and other species.”

A few years ago, Harvell’s research group discovered that a virus-sized pathogen was infecting sea creatures from California to Alaska and causing an epidemic called “sea star wasting disease.” The sickness affected more than 20 kinds of starfish, but sunflower sea stars were highly susceptible. The starfish are about the size of a car tire and pack as many as two dozen arms.

Sunflower sea stars’ vulnerability to the illness endangers one of the ocean’s most diverse ecosystems. The starfish feast on sea urchins, spiky pincushions with a voracious appetite. Sea urchins will eat almost anything, including kelp, the giant algae that create underwater forests along the shallow waters of the west coast. In some places, the disease triggered a cascade where sea urchin numbers boomed and kelp forests shrunk. Now, five years after the start of the epidemic, Harvell and her research team set out to document how much the disease had knocked out the once abundant starfish.

The researchers analyzed more than 20,000 bottom trawl and diver surveys from California to Alaska carried out between 2004 and 2017. The surveys revealed that sunflower sea star populations were steady in the deep waters of the Pacific Northwest up until 2012, but then plummeted between 2013 and 2015. After the epidemic, sea star abundance dropped 96 percent in some areas and as much as 100 percent in others, the team reports today in the journal Science Advances.

“We found the numbers are so low that [sunflower sea stars] are imperiled in the lower 48 and very rare in British Columbia and Alaska,” Harvell said. “That is the entire range of this endemic species.”