Squaring New U.S. Climate Report with "All of the Above"

It wasn't that long ago that global warming was mostly discussed as (and believed to be) a distant threat-- the scope, timing and severity of its impacts considered uncertain. Then in recent years, as climate scientists began studying and asserting linkages between greenhouses gases and severe weather events, the discourse shifted. 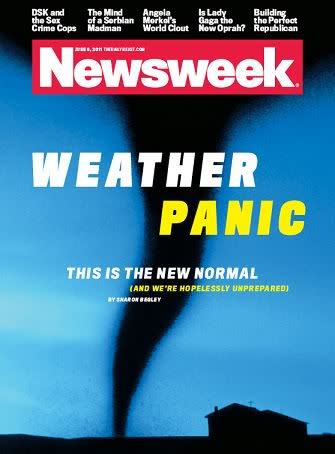 We are now at the point where everything from typhoons and mountain climbing tragedies to civil wars and wildfires are seen through the prism of global warming. This is not to discount man-made climate change as a contributing factor to particular extreme weather events and related disasters; I'm just making an observation about the one dimensional lens increasingly used by many to view the world at large. By suggesting this, am I off-message, unhelpful, contrarian? Regardless, no one can dispute the new discourse of climate change as an immediate and urgent concern. This week's orchestrated roll-out of a new U.S. government report on climate change officially cements the "new normal," a phrase used to characterize everything happening now in the context of climate change.

NBC had perhaps the darkest take on this new era.

Here's a headline from another NBC story:

President Obama was much less dramatic.

The #NCA2014 is clear: We have to act now to reduce carbon pollution and prepare for the effects of climate change. http://t.co/wIgUMan5wT — Barack Obama (@BarackObama) May 6, 2014

The official White House codification of climate change as a clear and present danger gave pause to some and left others wondering if the needle on public attitudes would be moved. One commentator found a silver lining.

If you just paid attention to the headlines and stories about the big climate report issued this week by the White House, you might get the impression that the Obama Administration is really and truly serious about tackling global warming right now. But that's only because you didn't hear what John Podesta, senior advisor to the President, said during a White House press briefing on Monday. Here's a taste:

The United States is now the largest producer of natural gas in the world and the largest producer of gas and oil in the world. It's projected that the United States will continue to be the largest producer of natural gas through 2030. For six straight months now, we've produced more oil here at home than we've imported from overseas. So that's all a good-news story...We've added 133,000 jobs in the last three years in the oil and natural gas extraction sector, and those numbers are projected to continue to grow. But at the same time as we've been producing more oil and natural gas at home we're cutting our energy usage dramatically, improving energy efficiency. That's part of what the President means when he says that we have an “all of the above” energy strategy, trying to produce more domestic energy but also using it in a much more efficient way.

Yes, we can do this, America! After listening to Podesta tick off all the Administration's statistics on increased oil and gas drilling, one reporter noted that it "pretty much read like a wholehearted endorsement of fracking." Indeed, Podesta's enthusiasm for the"good news story" about the upward oil & gas production trend line was unmistakable. At the same time, he affirmed the "overwhelming amount of evidence" for climate change that is "caused by CO2 pollution and other pollutants that we’re putting into our air." Additionally, he talked up the President's commitment to action on climate change and also said this:

if you want to try to side with the polluters and argue to the American public that climate change is not happening -- today, tomorrow and certainly in the future, that's going to be a losing argument.

The essence of Podesta's contradictory briefing was captured in this tweet:

Obama appears to be genuinely concerned about climate change. Whether natural gas ends up being a bridge fuel to a clean energy economy or not remains to be seen. But hey, if you take the new White House report on climate change at face value, then at least we can chart the impacts of the President's "all of the above" energy policy. UPDATE: I didn't see this Washington Post column by Dana Milbank until after I wrote my post. The opening graph:

On the eve of the Obama administration’s release Tuesday of a report warning about grave consequences of climate change, presidential counselor John Podesta went into the White House briefing room and crowed about fossil-fuel production in words that could have been penned by Dick Cheney.