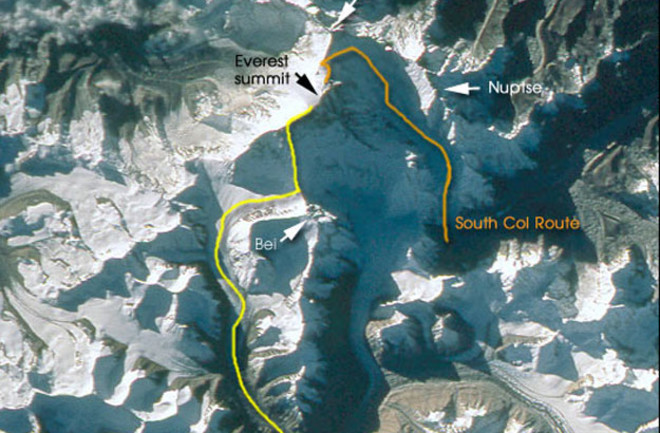 The next time someone asks you to take the trash out, don't make a big deal about it. Because, as Namgyal Sherpa will tell you, at least you don't have to climb a mountain to take out the garbage. Namgyal is leading a team of 20 sherpas who, come May 1st, will be climbing up to the world's highest garbage dump--on Mount Everest. The Nepalese mountain climbers will trek to above 26,000 feet to an area known as the "death zone" due to its lack of oxygen, Reuters reports. Once there, they'll gather up the trash left behind by previous expeditions. The Mount Everest spring cleaning trip is expected to yield tons of garbage like food wrappings, torn tents, and discarded oxygen bottles left between an area called South Col at 26,000 feet and the summit at 29,035 feet. The sherpas also hope to bring back the dead bodies of three mountaineers who were killed in the death zone, and plan to cremate them near the base camp. Namgyal Sherpa has already scaled the summit seven times and will be with a team comprised of equally expert mountaineers, including one teammate who has made the trip up Everest 14 times. They'll all be toting empty sacks to haul the trash back in. Namgyal, who goes by one name only, says some of the rubbish has been lying around since Edmund Hillary and Tenzing Norgay first scaled the world's highest peak in 1953; he says that the trash creates problems for other climbers as they trek through the treacherous terrain. He told Reuters:

"This is the first time we are cleaning at that height, the death zone. It is very difficult and dangerous.... The garbage was buried under snow in the past. But now it has come out on the surface because of the melting of snow due to global warming."

Many climbers leave their gear and trash behind as they descend due to exhaustion and lack of oxygen, Reuters adds. And garbage left behind on the mountain has become a source of environmental concern for the Nepalese government, which started imposing strict rules 15 years ago requiring climbers to bring back all their trash. But there are still no estimates on how much trash remains on the mountain. Related Content: 80beats: EXTREME SCIENCE: Doctors Drop Their Pants on Everest for a Blood Oxygen Test 80beats: Why Climbers Die on Everest: It’s Not the Avalanches (or the Yeti) 80beats: Tiny Soot Particles May Be Melting Mighty Himalayan Glaciers NCBI ROFL: High Altitude Flatus Expulsion (HAFE)Image: Wikimedia