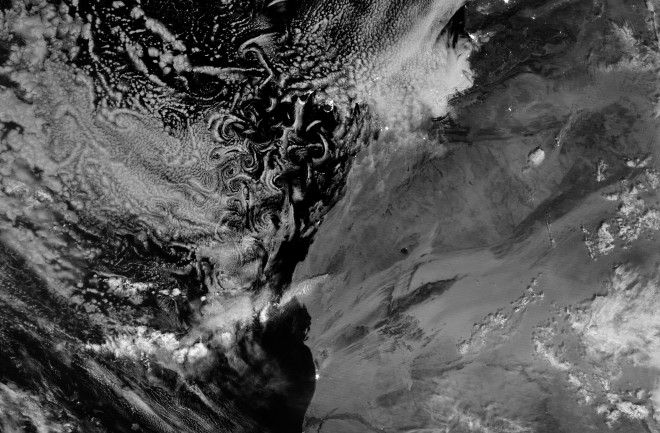 Spiraling cloud formations are often visible in satellite images — but at night, as seen above?

Until recently, that has been rare, at best. But newer technology for sensing and processing light in the shortwave infrared part of the electromagnetic spectrum has made it easier for satellites to spot these von Kármán vortices.

These features are just like the spiraling eddies that form in a stream immediately downstream of an obstacle like a rock. In fact, the atmosphere behaves much like a fluid.

The vortices seen above formed as air streamed around the Canary Islands in the North Atlantic Ocean off the coast of Morocco on July 19th. The disturbance to the wind flow caused water vapor to condense into clouds, which formed the spiraling eddy patterns in the wake of the islands.

“This is a spectacular satellite image,” said Paul Beggs, an associate professor at Macquarie University, quoted in a post at NASA's Earth Observatory (where I first spotted this image). “I don’t recall having seen an image of von Kármán vortices at nighttime previously, so I would consider it rare.”

Von Kármán vortices are not uncommon downwind of the Canary Islands, as the daytime Suomi NPP satellite view above suggests. And if you use NASA’s interactive Worldview website to sample satellite views of the world for yourself, sooner or later I’m sure you’ll find them in many other areas. (Over the years, I’ve offered a number of examples here at ImaGeo.)

Now, with the newer technology, I hope we’ll be seeing more nighttime views of this phenomenon.