So Long, and Thanks for All the Fish

Sheril R. Kirshenbaum In the first installment of Intersection-ing sans Chris, I've decided to address all this hullabaloo on Global Warming.. Is it real? More and more, scientists are criticized as alarmists jumping on the apocalyptic panic bandwagon while the rest of us have more important things to worry about. War, growing national debt, nuclear proliferation, and K-Fed's attempt at a hiphop career to name a few. So how dramatically has the state of the world shifted since humans came onto the scene? Can it be we just have an ego problem - bragging our species has had a supposed 'significant' impact because of our formidable big brains? After all, people have been coursing about this planet a couple million years and despite a crusade, flood, or plague here and there, we're doing okay. At six billion and counting.. we've come a long way baby! Although it begs the question; what's a few million years? Step back a minute and consider our home is about 4.6 billion years old (give or take a few millennia). Simple cells started doing their thing around 4 billion years ago with multicellular life arriving for the last quarter of that. Earth has experienced only 200 million years of mammals, of which just 65 have passed since the disappearance of dinosaurs. And it's only over the last 100 thousand or so that we modern humans have been poking around the planet, utilizing tools, discovering gravity, and auditioning for American Idol. Fast forward to 2007. The Earth is warming. Suspiciously, the world's 10 warmest years on record have occurred since 1995. Likely culprits include the emission of greenhouse gases from burning fossil fuels, industry, and deforestation. Perhaps coincidence or natural patterns of fluctuation? Regardless, it doesn't matter anymore. Whatever the exact cause, consequences will be significant. Melting glaciers raise sea levels, change rainfall patterns, and increase occurrence of extreme weather. Droughts and floods, temperature extremes, and the loss of biodiversity ensue. This is not the story of the mere extinction of a few rainforest frogs and polar bears, but we're talking a modern day survival of the fittest.. or rather, richest nations. Hold tight to your wallet because its going to be a bumpy ride when our access to water, safety, and health are at risk. 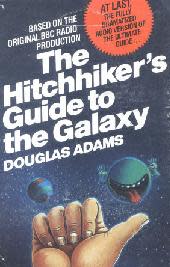 You see, despite our opposable thumbs, humans are indeed part of the ecosystem. Apocalypse now? Not exactly. But a warmer earth will precede a dramatic shift in life as we know it when some tipping point is reached. The interesting question - the figurative Where's Waldo of the big climate picture - find this threshold. Your guess is as good as mine. But hey, Don't Panic. Extinction is the only real certainty right? Like Livingston and Evans, 'Qué Será, Será.' After all, how many good millennia does a planet have?