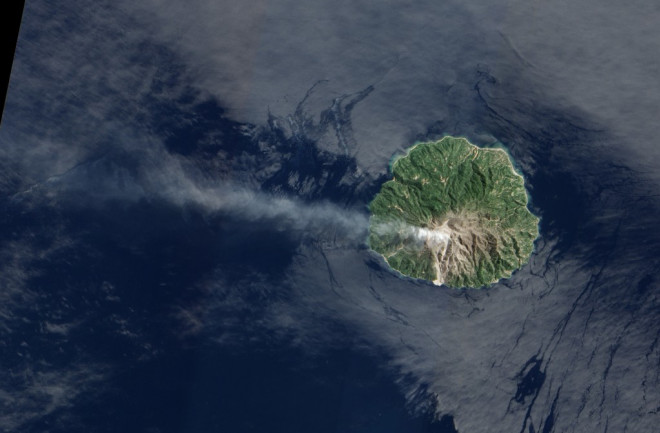 A smoke plume streams from Indonesia's Paluweh Volcano on April 19, 2013. The image was captured by the Advanced Land Imager on NASA's Earth Observing-1 satellite. (Image: NASA Earth Observatory) The image above of Indonesia's erupting Paluweh Volcano comes from NASA's ever-awesome Earth Observatory. The editors at EO chose to run a closeup, but I love this long shot, showing the green, crenulated ~ 8-kilometer-wide island surrounded by an ocean of dark ocean of blue — the Flores Sea, to be exact. The volcano, which rises 3,000 meters above the sea floor, but only 875 meters above the sea, has been rumbling and erupting for months. A dome of lava began inflating inside Paluweh's crater last November, and the volcano began spewing ash. Then, on February 3 of this year, a massive eruption threw ash into the atmosphere to an altitude of 45,000 feet. Paluweh continues to spew ash and volcanic gases, as the image above attests. When the volcano was coming alive back in November, at least 196 residents of the island were evacuated to the main island of Flores, according to the Jakarta Post. But that didn't stop an intrepid group of videographers from setting up their cameras right near the giant, smoking, shaking lava dome.